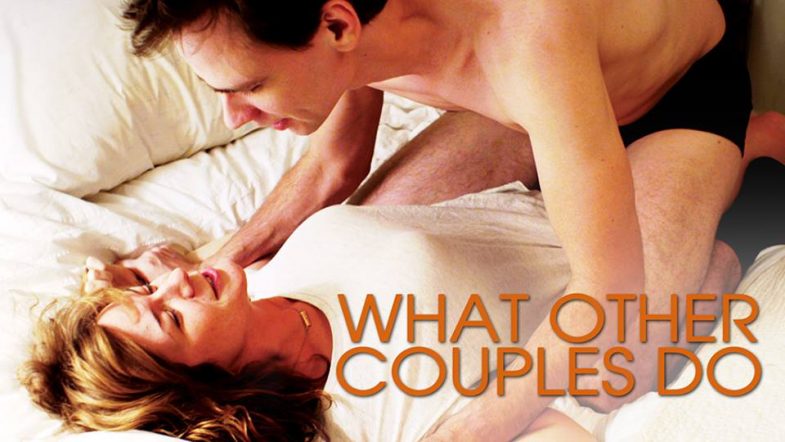 What Other Couples Do is a movie about four married Los Angeles couples who get together for a dinner party and decide to play Seven Minutes in Heaven, “a kissing game.”  Courtney Daniels wrote and directed the movie and did an excellent job making the film very believable by creating couples that everyone can relate to.

The four couples are immediately introduced and we quickly get a good understanding of what type of relationship each has.  They are all at a different point in their lives: one couple is childless, one has been married a while and has two young children, one of the couples is trying to get pregnant, and another has a young son and is going through a divorce.  Any couple that stays together long enough typically goes through multiple stages–the first being the passion stage, where you think your love and sex life will never end.  After the lust fades, it’s a big test as the couple must respect and love each other enough to stay together despite what might be a nearly nonexistent sex life.  Then comes the Hell stage in which you have kids.  If both in the relationship contribute to getting through the first few years of raising children, then you will likely survive anything.  However, if the childcare effort is lopsided, with only one person doing a majority of the work, problems tend to arise.  Each of the couples in What Other Couples Do is in one of these stages.

The movie touches on many different topics that couples talk about in real life, including sex.  When the men and women hang out away from each other, the conversations get more interesting, especially when each camp talks about their spouses.  Things are disclosed that may have the audience scratching their heads, wondering if that’s what’s going on in their own relationship.  Like, when the women tell their girlfriend her husband is amazing, she says she would never reveal that to him, because she’s afraid it’d give him too much power!  And when the women talk about their sex lives, you sigh in relief, knowing it’s not just you experiencing what they describe.  Fun is poked at both genders and everyone in the group even rips on themselves a bit, making the characters genuine and fun to watch.

Bree and Ryan (Cate Beehan and Michael Marc Friedman)
They’ve been together the longest and appear to have the strongest relationship of all the couples.  They already have been through many highs and lows and now are just enjoying each other.  Well, of course there’s conflict, as with any normal couple, but they seem to love and enjoy each other the most.

Michelle and Dave (Emily Maya Mills and Robert Chester Smith)
If you have kids, especially a newborn, these two will be your favorite. Their lack of sleep has their irritability level extremely high and patience is non-existent. Dave not helping around the house doesn’t help either.  The little things that frustrate them are comical, including complaints like, “You didn’t start the dishwasher,” and of course things escalate later.

Lisa and Josh (Hari Leigh and Gregory Hoyt)
Josh is the controlling one in the relationship and is critical of Lisa. He is constantly belittling her and doesn’t even realize it, and despite living in a big house and having pretty much whatever she wants, she seems miserable.  Things won’t be getting easier, because they’re on the verge of moving into the Hell stage of their relationship as they’re trying to get pregnant.

Ginger, her actor boyfriend Brad, and her ex, Chris (Kristina Hayes, Eric Callero, and Christopher Goodman)
No need to explain how awkward it gets between these three.  Especially since Chris wants to win Ginger back.  Apparently he forgot how much he loved her a while back when he cheated on her.

It’s inevitable that the fun and drama will pick up when it’s decided that all the couples must spend the night, which means they can drink more.  To make it even more interesting, Michelle suggests they play Seven Minutes in Heaven, in which each person draws a name and gets to spend seven minutes in a closet with that person, kissing or doing whatever they want.  A few are reluctant, but eventually they end up going along with it, since everyone else is. To insure no one discusses the game afterward, they all sign an agreement.

When they start to play, it’s a bit nerve-wracking for them, wondering who they will be matched up with and what will happen in the closet. Will jealousy overtake the couples?  While in the closet, some talk, some get right to the making out, and some find it comfortable and safe enough to disclose personal details about their relationships.  A lot of curiosity and questions are raised in the closet and each trip to the closet we learn more about the characters, both positive and negative.

If anything good comes out of playing the game, it’s that the experience makes the couples talk more to each other.  Sure, there’s jealousy, curiosity and anger, and the question is, will each couple reconnect or will the game be the final dagger in their relationship?

Overall, the movie is quite entertaining due to the excellent acting, intriguing story, and the interesting and comical dialogue, which includes lines like, “Rich people have problems, too. They have to worry about guests ejaculating on their wallpaper.”  It’s a movie that all couples can relate to and it raises your own curiosity about which of your friends’ spouses you’d want to make out with and would it be worth it?

Daniels currently is working on her second feature film, about a married couple dealing with midlife crisis.  The film is sure to have some good conflict, drama, and comedic moments.  In the meantime go to Amazon to watch What Other Couples Do.
https://www.amazon.com/What-Other-Couples-Michael-Friedman/dp/B00QQV1U1U