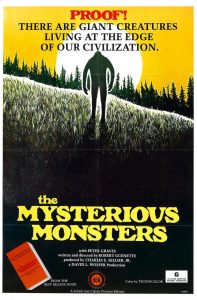 “The Mysterious Monsters” deals with the search for creatures science is not yet prepared to confirm the reality of. The elusive “stars” of this film are Big Foot, The Abomidable Snowman and The Loch Ness Monster. I actually saw this movie in a theatre in 1976, and one thing I do recall is being astonished to witness for the first time in my life the famous “Patterson film”, blown up to a 35 millimeter print and projected on a big screen. “Look at that!” I gushed to my buddy Ian as an actual sasquatch marched across the screen, elongated arms a swingin’. Then, in the film’s most famous image (frame 325), “she” turned and looked straight out at all of us in the theatre. That for me was certainly the highlight of this movie, although it did have some other interesting bits. I liked the part where star/narrator Peter Graves takes a brief case to psychic, Peter Herkos. Graves then asks Herkos, who allegedly was told nothing about the contents of the case, to draw a picture based on any “impressions” he received from what was inside. Herkos then draws a picture of a large hairy looking man. So what was in the case? A plaster cast made from an alleged Big Foot track. There was also a couple fairly jolting dramatic recreations. In one, a fisherman discovers a Big Foot “monkeying” with his net. Another depicted an incident in which a woman was visited by a Big Foot that stuck it’s hairy arm through her front window. Those were the most memorable original parts of “The Mysterious Monsters.” The rest of the movie however seemed to be pretty much all culled from a television special that ran on CBS a couple years before called “Monsters- Mysteries Or Myths?”, the true benchmark for documentaries dealing with the strange and paranormal.

Back then it was a widely executed trick to take a television show or made-for-TV-movie and release it to theatres (particularly in Canada) with some extra footage (maybe 10 or 15 minutes worth) not shown for the TV airing. The original “Battlestar Gallactica” is a case in point. Of course we’d pay theatre admission prices to see it cuz, well, because we didn’t know the bloody thing would be shown for free on American television in a few months.

That aside, what made this the rare documentary to be re-packaged for theatres was the huge sensation “Monster- Mysteries Or Myths?” caused upon it’s initial television airing. Nothing before this show had on so massive a scale spread the word about the possible existence of Big Foot. The Internet and tabloid shows, which today would be the normal route for any new “evidence” about the existence of mysterious creatures simply didn’t exist in the 1970’s. The National Enquirer was probably the only major source for paranormal news back then so it was like a revelation when this special aired. Plus, the fact it was a professional looking documentary (produced by the Smithsonian Institute no less) that took a serious approach to the subject matter didn’t hurt either. Add to the mix some well composed, spooky music and coolest of all, the excellent choice of Rod Serling as narrator, and the result was something that held a massive TV audience it’s very grip.

Producer Robert Guenette did not disappoint, globe trotting first to the Himaylas for a look at the mystery of the abominable Snow Man. One portion presented “evidence” from an expedition that recovered a Yeti scalp, hide, and even a mummified Yeti hand. Witnesses included a Sherpa girl who claimed to have been attacked by the Snow Man. How salaciously cool is that?

Next the program shifted to the continuing search for Yeti’s North American cousin, Big Foot. This section included interviews with sasquatch hunters prowling the densely wooded areas of Oregon and northern California; verbal accounts by eye witnesses (some of whom really did look like hicks); and a very scary dramatic recreation in which Big Foot pays a late night visit to a boyscout troop. Richard Kiel (“Jaws” from the Bond movies) wearing excellent makeup played the curious sasquatch.

The only disappointing thing about “Monsters- Mysteries Or Myths?” was the absence of the famous “Patterson film”, but as mentioned above, they corrected that by featuring it prominently when the documentary was re-packaged for the theatres and released as “The Mysterious Monsters”.

Finally, the special traveled to Scotland for a look into the search for the Loch Ness Monster. This segment included strange sonar blips, the famous “Dinsdale Film” (considered the most convincing footage ever taken of “Nessie”), as well as the now discredited “Surgeon’s Photo”. There was also a shocking piece of film in which a man in a speed boat is killed on the Loch after striking a mysterious turbulence. Of course some Scottish eye witnesses were presented including a vicar who, as you listen to him, you can’t help but ask yourself, “how could a man of the cloth who seems as kindly as this chap be lying?”

The original “Monsters- Mysteries or Myths?” became the highest rated documentary in television history. A record that stood until at least the early 1990’s, and as far as I know still holds to this day. It certainly posed some fascinating questions but answered none about whether these creatures really do exist. One thing is certain though: “Monsters- Mysteries Or Myths?” did more to educate the public about crypto-zoology than anything before it, inspiring a host of crypto-zoological and paranormal-themed imitators like “Man Beast”, “The Outerspace Connection” and “In Search Of Noah’s Ark”.