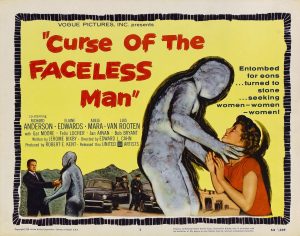 Watching this film you will easily be reminded of the Universal classic mummy films on Kharis (which starred Tom Tyler & Lon Chaney as the mummy Kharis). But instead of being a mummy this is a man made of stone that was found at the ancient site of Pompeii. It is very much like the Universal Kharis series.

I like this film – it’s not nearly as good as the mummy series but it is a fun horror film like any of the Kharis films. It’s just one of those movies you can really turn off your thinking cap and just kick back and enjoy the craziness on screen.