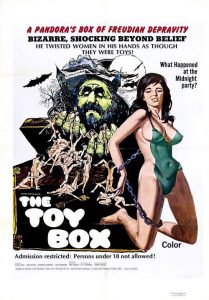 Los Angles’ Boxoffice International were truly the purveyors of some of the most unpredictable sexploitation movies ever conceived, and they didn’t come much stranger than The ToyBox. Two swingers Donna and Ralph, along with a whole bunch of like minded individuals come to a castle run by `Uncle’. Uncle is a rich old man who rewards them for acting out some of their most out to lunch fantasies with a gift from the `Toybox’ that always contains something they’ve always wanted. Its the fantasy scenes of `greedy people performing sex acts’that make up the film and what strange fantasies these folks have! One tubby guy fantasizes about women being hung up like butchers cuts who come back to life and hack him to pieces with meat cleavers. In what appears to be a parody of a German sex film, one long haired guy imagines himself and a girl running around speaking German, he puts on a scary mask and she kills him with a pitchfork. Uschi Digart, an actresses with big things in front of her turns up to get groped by a horny `Thing’ like hand in a box (the latter scene really has to be seen to be believed). Donna and Ralph soon realise that things are far from normal- How does Uncle know what they’re doing when he always stays in his room?, Why does he appear dead ? and why is he so lacking in the eyeball department! is it all part of an alien invasion? Soon severed heads start falling from the roof, people start dropping dead on the spot, a 50ft Woman and a glowing Kiss Me Deadly style case turn up as well. Never mind what 70’s exploitation movie audiences made of this, today I can’t imagine anyone watching The Toybox without thinking `what the hell is this?’ What it is, is wonderfully disorientating. The Toybox also contains scenes that put most horror films of the time to shame, plus a spooky ending of Carnival of Souls proportions. Confusing? oh yes but far from the average softcore quickie its an almost impossible movie to classify- part Sci-Fi, part House on Haunted Hill and part skin flick as viewed through the eyes of someone on the verge of infinite madness. As for director Ron V Garcia he’s more well known as a noted cinematographer on many movies (everything from Seventies sleaze to recent mainstream assignments) and has a good eye for the bizarre. Its a shame he didn’t direct more movies, then again how could you top something like The Toybox?. It was as if Garcia wanted to create the most eccentric movie on the face of the planet, and he certainly had a good go ! The Toybox then is surely the best surreal Age of Aquarius sexpo overflowing with early Seventies craziness ever made.