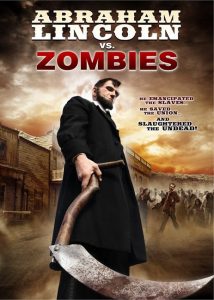 The film had a very indy, unpolished look. From a cinematography standpoint, the film could have used a better audio mixer or even balanced it. With about another week in the editing room, those things could have been smoothed out.

On the plus side, there were terrific costumes, the camera boxing by the DP was fantastic and the acting was good overall, but Bill Oberst Jr. was ABSOLUTELY excellent. Loved the story and the way the writers worked in historical lines in the name of butt whoopin, “emancipate this!” They had fun creating it and it showed.

I think The Asylum films bring a MUCH needed levity to an industry that takes itself WAY too seriously. Every release from the big studios are on such a grand scale that the trailers themselves look like they cost a $million plus. The blockbusters are so reliant on “wow” cgi, that character development/creativity and story lines are somewhere in the trunk under the spare tire and jack!