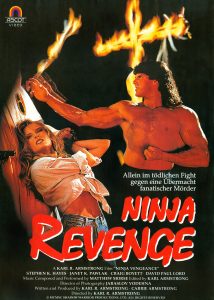 The movie has a sort of amateur feel to it, which isn’t that surprising, since it got made by a whole bunch of people who had never worked in the industry before. It’s as if a bunch of friends said; ‘hey, let’s shoot a ninja movie!’ and somehow managed to get all the resources and people together to pull it off. The directing, the writing, the editing, the music, the acting, it’s all really below par and quite clumsily at times but the movie does manage to still bring some entertainment. It’s not a boring movie, mostly since its one that’s always on the move with its main characters.

Not that it’s a spectacular movie to watch action-wise especially if you’re expecting lots of ninja fights but there is still enough action in it. In a way this movie reminded me of a lot of ’70’s exploitation action flicks, set in a random Southern town, in which a stranger arrives in town and gets in trouble with the local rednecks. The movie even looks like an ’70’s movie, though I highly doubt this was intentional. It all has to do with its obvious very low budget they had to work with.

It’s a very silly movie, mostly due to its simplistic script. The way things progress and get build up are all highly unlikely. It also doesn’t really make the characters any strong ones but that doesn’t really matter since the movie doesn’t even really feature real actors in it. Craig Boyett and David Lord were probably only cast because they knew some moves and Janet Pawlak, who runs like a pregnant aging chimp, probably got cast because she was willing to take her shirt off.

The movie its premise might sounds promising to some (an American ninja fighting a bunch of KKK members) but the movie itself doesn’t really know what to do with its own concept. Still I think if you’re into the this ninja stuff and in particular the true philosophy behind it you will be able to appreciate this movie much better than most people are able to.