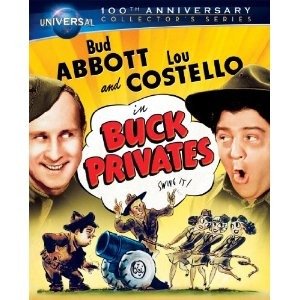 Don’t rush to see the digitally remastered main film first. Take time to savor the bonus feature in which Jerry Seinfeld narrates a 45-minute documentary (first aired in 1995) that puts into perspective the careers of Bud Abbott and Lou Costello, two of the most popular figures in radio and movies in January 1941, when this film was released. Being a total lover of the Abbott-Costello team, Seinfeld explores their years in vaudeville that gave them a background for visual and verbal comedy, especially the shtick of misunderstood words, or the “Who’s on First” genre. And how the boys went on to become cherished radio, film and TV stars, Lou the rotund buffoon, Bud the seemingly serious-minded straight man. “Buck Privates” itself (a box office smash followed by 14 more Universal Studio Abbott-Costello hits before World War II was over) is a silly but entertaining comedy with moments of pure slapstick as the boys mistakenly get themselves drafted, but it also focuses on the Andrews Sisters, who energetically deliver a number of their popular songs surrounded by vibrant, young boogie-woogie dancers. Absolutely ridiculous, and fun in the same breath. This special set has both Blu-ray and regular DVDs and is highlighted by a 46-page color booklet (introduced by John Landis) with biographies, photographs, newspaper reproductions and other features.