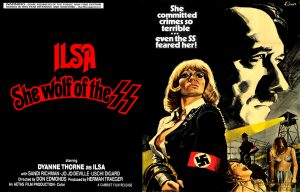 ILSA – SHE WOLF OF THE SS is the first in the “infamous” series of exploitation films featuring buxom ball-breaker, Dyanne Thorne. These films are a classic example of true exploitation cinema and should be checked out by any fan of “extreme” or exploitation films. Short version: Ilsa is the head bitch at a Nazi experimentation camp. She gets her kicks by torturing the male and female prisoners in all kinds of interesting ways. Overall, SHE WOLF is pretty tame in the gore department, compared to what is out there today. I’m sure if you saw this when it first came out in ’75, it was probably some really racy stuff…but being from a generation raised on blood-and-guts, the Ilsa films are more laughable than “shocking”. I prefer SHE WOLF and the under-rated TIGRESS OF SIBERIA installments over HAREM KEEPER OF THE OIL SHEIKS and WICKED WARDEN (those two having more of a sleazy sex overtone, and being very light on the red stuff…) but all are worth a look just to say that you’ve seen them. Anchor Bay has put out a beautiful box-set that contains SHE WOLF, HAREM KEEPER, and WICKED WARDEN, and if you check the right on-line dealers, you can find it for dirt-cheap. Makes a great collection piece. To my knowledge, TIGRESS OF SIBERIA is not available on DVD at this time (at least not in the States…) which is a shame, because although many other reviewers trash it, I really liked that film. Anyway, if you are an exploit fan these films should already be in your collection. If you are interested in checking out this type of material, these films are as good a start as any. Not for the average movie-goer, but not as over-the-top as they could be nowdays.