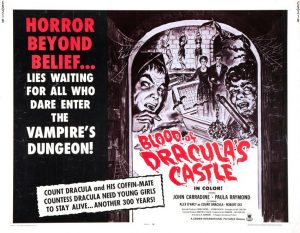 This is by far not the worst vampire or Dracula movie on the market but it is nowhere near the best – it’s middle ground at best. It’s not a film I would recommend to vampire and horror movie fans but it is not one I would say it’s just so awful that you should stay clear of – I’ll tell you it’s so-so or okay.

John Carradine had a fairly decent role as George – the butler. He got ample screen time which I really like. The character George is the butler and caretaker of Count Dracula aka Count Townsend and his Countess. George was saved by the Count from hanging and is forever the Count’s loyal servant.

There is a very violent criminal named Johnny who escapes prison and runs to see his old “pal” George and the Count. He joins them in helping to get fresh blood (victims) for the Count and his bride.

The is also a very strange man in the castle that helps the Count named Mango. He is there to help make sacrifices to the evil God Luna.

Enter Glen and Liz enter, the story becomes kinda boring and draggy but they will “save the day”.

Overall an OK watch – not a film that is memorable, impressionable but kinda campy fun in its way.