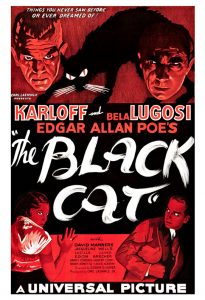 “The Black Cat” (Universal, 1934), directed by Edgar G. Ulmer, marks the first scream, or should I say, screen teaming of Boris (“Frankenstein”) Karloff, billed in the credits only as KARLOFF, and Bela (“Dracula”) Lugosi.

Suggested on the immortal story by Edgar Allan Poe, the plot, compliments of screenwriter Paul Ruric, set in Hungary, gets right down to business with Doctor Vitus Werdegast (Bela Lugosi) returning home by train after serving 15 long years in a military prison. He finds himself sharing a compartment with mystery writer Peter Allison (David Manners) and his wife, Joan (Jacqueline Wells), on their honeymoon. Vitus introduces himself to the Allisons, talks about himself and of his mission to visit a “very old friend.” The couple later accompany Werdegast on a bus to their destination, which meets with an accident during a rainstorm, killing the driver. Vitus accompanies Peter by taking the injured Joan through the rain and winds until they reach the home of Hjalmar Poelzig (KARLOFF), an architect of his futuristic mansion. As Vitus treats the unconscious Joan, Hjalmar, who makes his grand entrance, immediately takes notice on the young girl with intentions that are not too honorable. As the story progresses, the viewer learns that Vitus had been betrayed by Hjalmar during the World War and left to die at a military prison, and for this, Vitus, who survived those long dark years, returns to seek revenge, but first must learn what has happened to his wife and daughter. Peter and Joan become house guests in the home of Poelzig, unaware that they are his prisoners, with Poelzig, who holds Black Masses in a devil’s cult ceremony, intending on using Joan as his next subject and hold Peter in a dungeon below. Besides trying to learn the whereabouts of his wife and daughter, Vitus tries to set Joan free by playing a game of chess, or a “game of death,” with Hjalmar. Tension builds up to a very suspenseful climax not to be missed.

What does this have to do with a black cat? Well, Vitus fears cats and finds himself being confronted with one in two separate scenes, compliments of Hjalmar, who has cats roaming about. Karloff and Lugosi are evenly matched here, and as bitter enemies, they must present themselves in a “gentlemanly manner” whenever confronted by the young guest or guests. Also presented in the cast are Lucille Lund as Karen Poelzig; the evil looking Harry Cording as Thalmar, Hjalmar’s servant; and John Carradine as one of the members of the cult during the Black Mass sequence.

Although produced in Hollywood, “The Black Cat” looks very much like a European production with futuristic sets which features a digital clock, etc. Karloff, dressed in black garments with a feline haircut, is very creepy, especially using gestures with his evil eyes (which do everything but glow in the dark!); Lugosi, in a rare sympathetic role, is actually the stronger character, giving one of his best performances in his career, next to “Dracula” (1931). Fortunately, “The Black Cat” was released shortly before the Production Code took effect, otherwise the horror drama, with many scenes quite questionable then and now, would never have reached the theaters unless severely edited to a point of confusion. Chances are the movie itself was edited prior to release, but at 66 minutes, it’s tight and fast-paced, never a dull moment. A big plus in this production is the underscoring montage of classical compositions by various composers, lavish sets and the teaming of two horror greats, Karloff and Lugosi.

Aside from Fright Nights on commercial television back in the 1960s and 70s, “The Black Cat” formerly played on the Sci-Fi Channel in the 1990s, and later on American Movie Classics from 2000 to 2001. To date, “The Black Cat” can be seen on Turner Classic Movies where it premiered on January 24, 2003, becoming one of this cable channel’s most revived horror films. Probably by request. “The Black Cat” is also available on video cassette either as part of the double feature along with “The Raven” (1935), another Karloff and Lugosi thriller, or as a solo package. A gem for fans of this genre. (***)