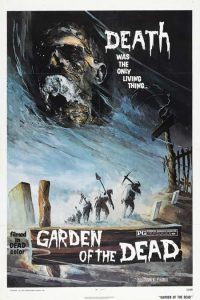 Gardener is a 70s Horror Film starring Joe Dallesandro as the title character, a gardener with evil powers. More importantly, gardener who never wears a shirt with evil powers. Excited yet? The movie is very pretty, filmed in Puerto Rico. Very gorgeous shots of various flowers and our title character fill the movie. It’s not very believable that Carl – The Gardener – can manipulate the flowers to drive his employers and friends crazy, and that’s mostly because it isn’t really explained. It just happens, and they expect us to believe it because the evidence is there. He comes, he goes, they go crazy. I want to say that this movie was made to exploit the young actor (at least young at the time), but he’s never really explored. He has some exploitive scenes, like when he skinny dips and seduces various female characters, but he’s really not “fleshed” out. LoL. Flesh. Our main character Ellen (played by Katherine Hepburn’s niece Katharine Houghton) gets most of the screen time and she falls prey to Carl’s powers of manipulation. The flowers in the house start to affect her other servants, her husband, and her best friend, who just wants to bed him. (Rita Glam, stealing every scene she’s in) I obviously wanted to watch the movie for some eye candy, and I kinda’ get it. Joe Dallesandro as Carl struts around the movie in nothing but a pair of tight camel skin pants. We get a butt shot and some ab shots, but nothing that I can’t see on an episode of Desperate Housewives or Weeds. Still, the acting of our two main actresses, (playing the typical main character and main character’s horny friend that pollutes so many other films) rises above B movie status and they take the ridiculous script so seriously that it elicits some unnecessary laughter throughout. Worth a watch for cult movie fans, and gay people, but don’t expect too much.