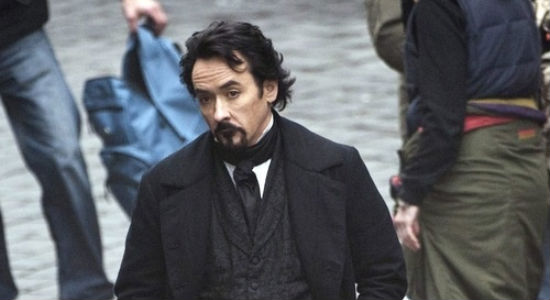 Much we know is true: Edgar Allan Poe died on Oct. 7, 1849, at the age of 40, after having been found delirious and incoherent in the streets of Baltimore. His exact whereabouts in the few days previous remain unknown. His death has been attributed to everything from alcoholism to rabies to various medical conditions.

“The Raven,” the sleek and brooding thriller opening Friday, offers a different and improbable – but much less mundane – solution to the mystery. The movie, which incorporates several of Poe’s best known tales into its narrative, also presents a side of the author far different from the usual somber persona of his biographies. Played by John Cusack in a fiery spin-wheel of a performance, Poe is an impetuous scoundrel: He’s arrogant yet insecure (“I despise people who despise me!”), funny yet abrasive (“I’d rather stand. It makes it easier to leave”), self-destructive yet relentless.

“There are a lot of beautiful-ugly paradoxes about the guy,” Cusack says. “We made sure to touch on all his different facets. He saw himself as a provocative and satirical writer. He was very aware his work was in bad taste. He had a great sense of shock value and gallows humor. But he was also very competitive and constantly attacking other writers. And he was intellectually ferocious. All those things help make him feel like an incredibly modern character, even though the story is set in 1849.”

Cusack believes that Poe’s willingness to transcend genre, confound expectations and challenge conformity – in his poetry, fiction and work as a literary critic – helped his legacy endure. Today, Poe is primarily remembered as one of the godfathers of modern horror: “The Pit and the Pendulum” and “The Tell-Tale Heart” can still stand up to whatever nasty business the “Hostel” or “Saw” movies serve up.

But Cusack sees more in Poe than frights, comparing the author to contemporary godheads such as Kurt Cobain or Hunter S. Thompson – two other artists who suffered greatly for their work to indelible effect.

“Poe was punk in a lot of ways,” Cusack says. “He was also a guy who mashed up genres and created new ones. He wrote esoteric poetry and pulp thrillers and cliffhangers and grotesqueries. He wrote stories where baboons were coming out of chimneys with razor blades to kill people. But he also had a great striving for beauty and he was a pioneer of the subconscious. He had his finger on the zeitgeist when it came to the neuroses and fears and terrors of the time, and he gave that stuff a voice. Today, anybody who suffers outwardly like he did is a high priest of pop culture, you know?”

“The Raven,” which incorporates facets of Poe’s life into a fictional narrative that also borrows from his best-known tales, had been kicking around Hollywood for nearly a decade. The screenplay was originally written in 2002 by Ben Livingston and Hannah Shakespeare, who found out the film was finally getting made when Cusack announced on Twitter he had accepted the role.

“Most people think of Poe as this morose, sad, drunken writer,” Livingston says. “But he was so much more than that. He was capable of being very charismatic and he could be the life of the party. He had a tremendous sense of humor and he was very well liked. And yes, of course, he could be a miserable alcoholic at times. We wanted to show all those sides of him – not to rehabilitate his persona, but to show how interesting he was.”

Livingston points to incidents in Poe’s life as proof of how likable the writer could be. For example, soon after his short stint at West Point from 1830-1831, he moved to Boston and self-published a collection of poetry funded by donations from his fellow cadets, who had loved the funny, satirical poems he wrote about the school’s officers.

But Livingston is quick to point out “The Raven” is not historical fiction. “This is fiction-fiction,” he says. “We’re using Poe as a character in our story.”

“The Raven” centers on a demonic serial killer who patterns his crimes after Poe’s tales and eventually targets the author’s beloved (played by Alice Eve). In terms of story and mood, the movie is much closer to “Seven” than “Masterpiece Theatre.” Despite the fantastical elements, director James McTeigue (“V for Vendetta,” “Ninja Assassin”) strove to capture the feel of the era through production and cinematography. To recreate the look of 19th Century, pre-Civil War America, McTeigue shot the film in Budapest and screened several movies to inspire the crew’s art designers and lighting units, from the 1935 Peter Lorre chiller “Mad Love” to more recent pictures such as “Barry Lyndon” and “Moulin Rouge.”

McTeigue, who also shot second unit on all the “Matrix” films, concentrated on bringing a modern sensibility to the period setting, because he admits sitting through a straightforward biopic on Poe would not appeal to a wide audience.

“This is not historical Poe: This is the popcorn version of Poe’s life,” McTeigue says. “There are little tricks you put into a movie to make it feel contemporary. Some of the costumes have modern lines to them. Some of the visual elements are borrowed from graphic novels. It’s subtle stuff, but it all starts to bleed into the fabric of the movie. And then you have the performance by John, who is friends with Damien Hirst and other artists who were once ahead of their time. He brought their kind of energy to the film.”

Cusack says that after playing Poe and researching his life, he can recognize the author’s influence in many aspects of culture beyond horror.

“You can see him in William Burroughs and Norman Mailer. You can debate the merits of Howard Stern all you want, but what he’s doing is voicing people’s obsessions and problems and perversions. Stuff like heavy metal and death metal is the result of feeling overwhelmed and drowned by society. What do you do in a modern world when you can’t find any authenticity or meaning? You embrace your biggest fears, which are death, horror, sex, perversion – all those shadowy feelings and ideas polite society says you’re not supposed to talk about. It’s nice to be happy and joyful, but it’s also nice to give air to your shadows. That’s what Poe did.”