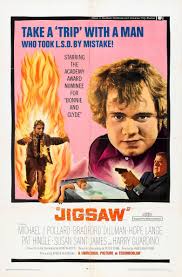 Definitely screams ’60’s Universal Studio Telefilm’, but if you liked the looks of those pictures (as I do), this is a well photographed, directed and acted little picture. Bradford Dillman, that Olivier of the B’s, starred, but Pat Hingle and Harry Guardino had the tastier roles. James Goldstone directed — he had one of the cleanest, most recognizable styles of late sixties contract directors, though his name is barely known.

The story is a very loose remake of Mirage, the 1960 Gregory Peck vehicle, but it is really another picture entirely. If you’ve seen the one, you have not seen the other.

Jigsaw swims simultaneously in alienation, paranoia, 60’s technicolor psychedelia, and general cold war fear and loathing. The surprise ending is a visual gas, the cinematic equivalent of an acid flashback. It deserves a look if it ever shows up on the tube. In these more modern times of alienation, paranoia, and fear and loathing, an entertaining, slightly fluffy reminder that we’ve already met the enemy and he is STILL us.