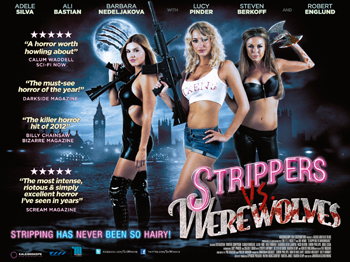 Director Jonathan Glendening of 13Hrs werewolf notoriety doesn’t move that far away from his furry feral fiends in his latest grizzly flick, Strippers Vs Werewolves.

After werewolf Mickey (Martin Kemp) is accidentally killed in strip club Vixens, the girls who work there have until the next full moon to work out how to respond and defend themselves, before his bloodthirsty wolf pack, led by Jack Ferris (Billy Murray), work out who is responsible and seek murderous retribution.

It’s not the pulpy title or necessarily the opening title sequence to Duran Duran’s ‘Hungry Like A Wolf” that pricks the interest, but the first doggy disposal that sets the stage for an indulgent retro farce, complete with a bit of healthy Essex ribbing, top 80s hits and some camp star turns. This film then takes its namesake by the balls and drags it forward, so much so, that there is little time for any real character evaluation, even though there is a vague attempt at introductions for such a low-budget film that’s primarily set on featuring carnage.

The impressive cast – that also includes turns from Steven Berkoff and Sarah Douglas – does the best of a B-movie situation, poking fun at the stereotypical roles they’ve been cast in, which increases the viewing pleasure. In fact, the dodgiest acting is the girls’ bad pole dancing on display, rather than Englund’s eternally corny bad guy snarl. Murray can always comfortably sneer for England, having played his fair share of bad guys too, so pulling it off as a deranged werewolf is no tall feat for the seasoned actor, matching Englund in their scenes.

However, the unexpected ‘star’ of the bloodbath is actually Simon ‘Jack’ Phillips in Pegg ‘Shaun of Dead’ deadpan mode. As the token comic-book geek, he provides the biggest laughs of the lot while battle his own demons while on a phone, and saves the film’s ending from the doggy mire.

Strippers Vs Werewolves is out to get outrageous cheap thrills – as silly as they are and propped up by great one-liners rather than a good scriptwriting at the irony of the idiotic situations. This enjoyable film makes no concessions for its lack of polish but is aided by a great cast who simply fit snugly into roles we’ve seen them in before, but shape shift for our pleasure. Plus the promise of eventually seeing these two groups battling it out in a strip joint is as titillating and ridiculous as it sounds, however over-edited the killing spree is.