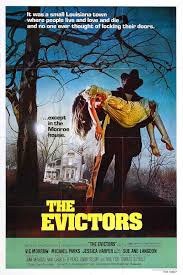 In 1942, Ben and Ruth Watkins have just moved into an old Louisiana farmhouse. It’s a beautiful place, but they soon learn of it’s morbid past. Apparently, the previous few tenants all died in ways that raise suspicion. This doesn’t sit well with Ruth, who stays at home alone most of the day while Ben is at work. As if she weren’t spooked enough already, it isn’t long before she finds herself menaced by a prowler who keeps showing up.

Charles B. Pierce, the man behind such southern-flavored gems as ‘The Town that Dreaded Sundown’ and ‘The Legend of Boggy Creek’, scored again with this outstanding mood piece. Atmosphere always was Pierce’s strongest point, and ‘The Evictors’ features it in spades. The slow-burn pacing works brilliantly here, allowing the ominous tone to fester. The 1940’s setting and impact of World War II on the financially struggling town are also well-realized, the former all the more so thanks to the lovely scope photography Pierce so expertly utilizes. Some effective sepia-toned flashbacks further the mood, as does the hushed nature of the townspeople in regard to the house’s history.

Jessica Harper and Michael Parks play the married couple, and there is an obvious chemistry between them. It was great seeing the lovely Harper in a horror film other than ‘Suspiria’ for a change. Vic Morrow is on hand as the shady real estate agent who sales them the house and has eyes for Ruth. His role isn’t the largest despite him getting top-billing, but it’s an important one. Sue Ann Langdon also deserves mention as the crippled neighbor whom Ruth befriends.

The film offers up it’s fair share of surprises as it heads toward the climax. There’s one aspect of the story that was easily predictable, at least in my case, but others not so much. This is one of the true unsung gems of the 70’s.