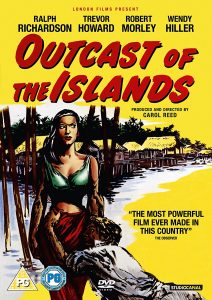 Carol Reed’s “An Outcast Of The Islands” is generally conceded to be the finest film ever made of Joseph Conrad’s tales. To be fair “Nostromo”, “Under Western Eyes”, and “Chance” never have been filmed. Hitchcock’s “Sabotage” (based on “The Secret Agent”) is a good Hitchcock film, but the story is modernized and changed. The later film version of the novel was politely received and then forgotten. “Victory” was made into a serviceable love and adventure story with Fredric March and Cedric Hardwicke, but the irony and allegory of the story was lost. “Lord Jim” was better recalled for the severe drubbing critics gave it – concluding with a Mad Magazine spoof called “Lord Jump”. There is “Apocalypse Now” which is a fine attempt at “Heart of Darkness”, but it changes the site of the story from the Belgium Congo of Leopold II to Vietnam in the 1960s and 1970s. “An Outcast” stuck to the basic story of Willems and his betrayal of Almayer and Captain Lingard for a beautiful native girl. Trevor Howard gave many memorable, delicate performances in his life (best, perhaps, for “Brief Encounter”), but this performance as a man who was poor enough material to begin with but goes to seed is possibly better. The supporting cast is great, with Robert Morley playing his most despicable character, and Ralph Richardson as the decent Lingard. George Coulouris is properly Machiavellian as the sly Babalatchi, and Wendy Hiller is tragic as that human dishrag Mrs. Almayer. The only problem a purist may have is that Willems is killed at the end of the novel accidentally (and quite memorably). Not so in the film. But his punishment of living as a monument to failure and hopelessness may be even more fitting –