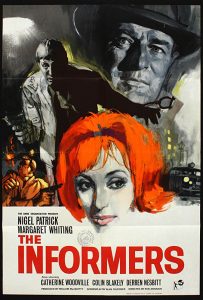 THE INFORMERS is a top-tier British crime drama that takes a straightforward plot about a group of bank robbers and invests it with depth, deep characterisation, and at times an epic kind of feel. These heist stories were ten-a-penny during the era, but this film’s tapestry is vast and a whole slew of British character actors, old and young, make up the tableau. Nigel Patrick is excellent as the dogged detective on the case while Harry Andrews plays his exasperated superior. The bad guys are helmed by a stand-out Frank Finley, making an impression at a young age, and an incredibly slimy Derren Nesbitt at his most weaselly. This is undoubtedly an actor’s film, with small but important parts for the likes of George Sewell, Roy Kinnear, Colin Blakely, Allan Cuthbertson, Michael Coles, and many more besides. Margaret Whiting is a particular stand-out as the sympathetic femme fatale but nobody puts a foot wrong here and the experience is thrilling, dramatic, and thoroughly suspenseful.