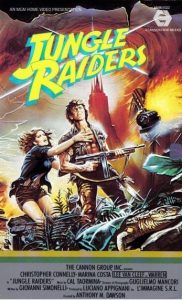 I’ve got to say that the first 20 minutes of this film are admittedly excellent and show director Margheriti on top form. In a nut shell, Christopher Connelly plays the strangely named Captain Yankie who is running an amusing scam in the tropics for those with more money than sense. The good captain is leading mock expeditions into the jungle to recover ‘lost artifacts’ from ‘savage natives’ (in reality the friendly indigenous population who happen to be good friends with the captain) Accompanying our hero is also a worldly wise, jovial (and very drunken) Scottish guide (Margheriti regular Luciano Pigozzi) who is even ‘killed’ by the ‘savages’ early on in the shown scam for maximum effect!

News of these scams (or ‘dreams’ as our hero likes to call them) however gets out to an inspector (Lee Van Cleef) who, using them against our heroes, coerces i.e. blackmails them into undertaking a very real mission to retrieve a priceless artifact known as the Ruby Of Doom (a most unsettling name…) Needless to say, such a task proves to be anything but easy with our heroes having to fend off vicious Burmese pirates, avoiding various lethal traps and being betrayed from within their own ranks. Mix in some of Margheriti’s always cool miniature work and a trademark explosive finale and you have on paper what should have been a great flick.

Unfortunately, after such a great introduction though, things go downhill with most of the action sequences being handled in a somewhat confused manner. Even the aforementioned finale whilst certainly pleasant to look at is handled with very little flair for Margheriti.

The good news is that the leads are tremendously fun to watch and the comedy present throughout is very welcome. One of the best bits is a scene in which the natives hear that Captain Yankie has arrived unexpectedly and thus perform a mad rush to hide all their westernised attire and accoutrement’s to play the part of ‘savages’ as they have done previously for the captain so many times. They even put out some fake human skulls for good measure!!!