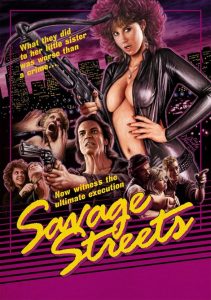 Definitely the highlight of Linda Blair’s post-Exorcist career, this sleezy tale of high school revenge is a must for bad film fans everywhere.

This touching tale tells the story of Brenda (Blair), a tough high school gal who spends her nights drinking peach brandy on the streets of LA with her equally tough friends. One night, they make the mistake of messing with a gang called the Scars (“careful Brenda, these dudes look dangerous”), and before you know it, the Scars have raped and beaten Brenda’s deaf, mute sister. Once Brenda learns the truth of what happened, she vows revenge on those responsible.

Directed by Daniel Steinman (Friday the 13th Pt 5), this film has some of the best (and worst) dialogue ever to grace the screen. Blair is fantastic, a hilarious mix of flared nostrils and foul language. Even better is John Vernon,as the principal, in his second film with Blair (Chained Heat is another must see). Vernon steals every scene he’s in, whether he’s telling Brenda she has “a great body” (!) or telling the Scars to “go f**k an iceberg”!

This is the ultimate 80s high school movie – terrible music, awful acting, questionable violence and gratuitous nudity. Seek it out if you haven’t seen it. It’s best seen in it’s uncut form, as here in the UK twelve minutes were censored!