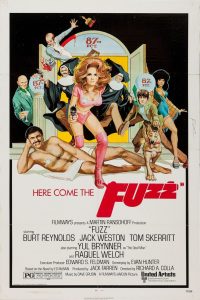 Burt Reynolds is so laid-back in this picture I thought he might fall over. He, Jack Weston and Tom Skerritt are cops at the Boston Precinct trying to stop a serial killer from blowing up more politicians, Yul Brynner is the bad guy who knows just what clueless cops these guys are, and Raquel Welch is the new badge in the building (the guys humiliate her for awhile, but she’s tough and proves her merit). This is a routine cop comedy with dramatic and sometimes violent overtones, not unlike “MASH” (which it attempts to emulate in its cynicism). It was moderately popular in theaters in 1972 mainly because Burt Reynolds had just posed for Cosmo magazine and the ads and the movie one-sheet played that up. I liked Welch’s scenes defending herself in the office (where she’s been unceremoniously dumped at a desk) and the climactic moments are well done. The end vocal by Dinah Shore is a wonderful bit (Burt was dating her at the time). But that very last shot is perplexing: there’s no explanation for it, and I’m sure it left audiences baffled. It’s an artistic shot, done with humor, but considering what happens before it, it makes no logical sense