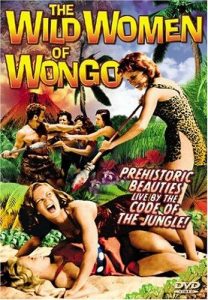 Well you sure can’t say that this camp classic does not have a memorable synopsis. Mother Nature has decided to experiment a little. Two primitive tribes live on opposite sides of an island but with a difference. The Wongo have beautiful women but ugly men, while the Goona have dreamy guys but unattractive gals. An attack by a tribe of savage ape-men from overseas brings both groups together. And the natural order of things falls into place. The message of the movie, cheerfully delivered, is that good looking people and ugly people should really stick together, it’s better for everyone in the end. It’s not a very right-on sentiment nowadays of course but it is a hilarious one for an old movie to base itself around. Consequently, The Wild Women of Wongo is a very memorable bit of nonsense.

It can probably be regarded as an early sexploitation flick. Although admittedly with no nudity. But by late 50’s standards I guess those girls in leopard skin bikinis was pretty racy stuff. They even, predictably, have a cat fight too. The main focus is also unsurprisingly on the hot Wonga women. They are banished by their slack-jawed male tribesmen for intervening and saving one of the dishy Goona guys from an execution. They travel through the jungle to visit a priestess and engage in an elaborate ‘dance of the dragon god’. The ‘dragon god’ itself was simply an alligator, which seemed somewhat ridiculous. But why question anything in this madness? We also have another prominent animal character – a wise cracking, talking parrot, who doesn’t really seem to serve any overall purpose to be perfectly honest. I think the film-makers just threw in everything they had at their disposal and wrote it vaguely into the plot. Also of note is the fact that the ape-men, who are the catalyst for the entire story, are only seen in one scene and by the end of the film are completely forgotten about; in fact, they seemed to have simply gone away.