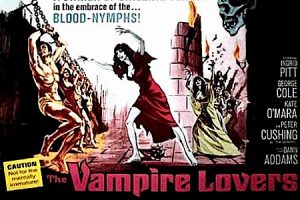 An ocean of mist hangs above a grave. A figure enveloped in a white shroud swirls through that mist with balletic grace, then rakes a hand across a bloody mouth.* A man at his niece’s deathbed calls for her missing friend. The call echoes through the empty chambers of the house and down the terrace outside, where the wind blows fallen leaves through the autumn night. The calls merge with older echoes in a cemetery beneath a ruined castle. A woman walks in those mists, clad in her nightgown. The mists dissolve her from sight. * “I want you – to love me – for all your life,” pleads a beautiful vampire turning from the view through a moonlit window to clasp the girl she loves with desperate intimacy. * That same vampire woman stands on a terrace in the sunset, tears glinting in her eyes while she listens to the ancestral echoes that condemn her to her fate. *

Yes, this is pure Hammer Horror: a work conceived as sheerest exploitation which somehow transforms itself – in its greatest moments anyway – to an authentic romantic poetry. Yes, of course, a lesbian vampire movie made by men may seem the height of sexism, and at a conceptual level the movie may be open to those charges. But a female gothic artist was involved here: Ingrid Pitt, whose Carmilla is such a vivid presence as to render herself the character we root for and her patriachal enemies as the true pale-faced monsters (Has Peter Cushing ever come across as less loveable?). Other screen vampiresses are bimbos or boogeywomen or upmarket fashion plates by comparison: Pitt is tigerish, witty, tender, passionate, vulnerable, savage and tragic: Perhaps the only actor, male or female, who has brought to full life all the complexities of the vampire psyche. She’s great and the other film-makers, at their best, rise to the challenge she sets. The movie is hardly unflawed but when its accidental poetry gels, few movies in its genre can surpass it.