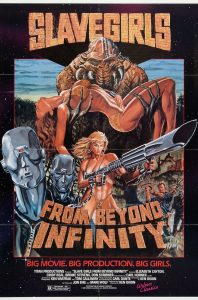 Titan movie has Elizabeth Cayton and Cindy Beal as slave girls who escape from a prison craft and end up on a strange planet. Fairly fun movie with good creatures from John Carl Buechler’s workshop and watchable acting from the leads. It’s a shame that Elizabeth Cayton has quit acting (now employed as an office assistant for a radical American political figure) as she is attractive enough and talented enough to make the film work. Good score by Carl Dante for what is a pleasing effort from early Full Moon territory. Not terribly sexy but with plenty of skin on show those not bothered about production values should also find something to enjoy.