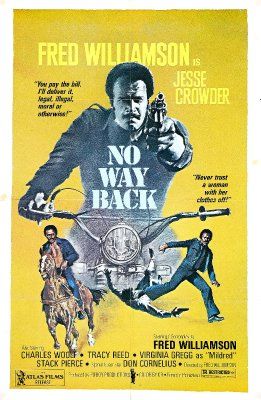 And not a very good one at that. A black private detective (played by Fred Williamson) must track down a married middle aged guy who is planning to elope to South America with a younger girl and two million dollars of a pimp’s money. The escapee’s wife hires him, she says she is desperate to have him back and will pay him well, but things aren’t as clear as they appear..

So, when you stick this in your VCR (You were expecting a DVD release?! HAHAHAHAHA Oh, ‘scuse me..) what can you expect to see? Bar-room brawls? Rooftop chases? Flash motors? Plenty of jive talk? Gratuitous nudity? Sex scenes accompanied by old 70’s tunes? If so, you won’t be disappointed. On the other hand, if you like understandable plots, convincing fight sequences, fantastic acting, non-padded screenplays and attractive girls, I’m afraid you’re way off.

Plus, I must mention the fact that my copy of the video had a very annoying black line going down the middle of the screen for the first half-an-hour at least, with an awful amount of background flicker throughout as well. I don’t think this problem just affects my video, I believe that the fault lays with the original version.. probably due to the very low budget and the inept camera-work throughout. Still, it is very irritating, and the film should not have been released in this condition.

If you are a die-hard fan of the blaxploitation genre, you may derive some enjoyment from this lacklustre effort. The rest of us though, know that.. as sure as eggs is eggs and the sun will come up tomorrow, Fred Williamson ain’t no Richard Roundtree, and this movie is not fit to even lace Shaft’s bootlaces.