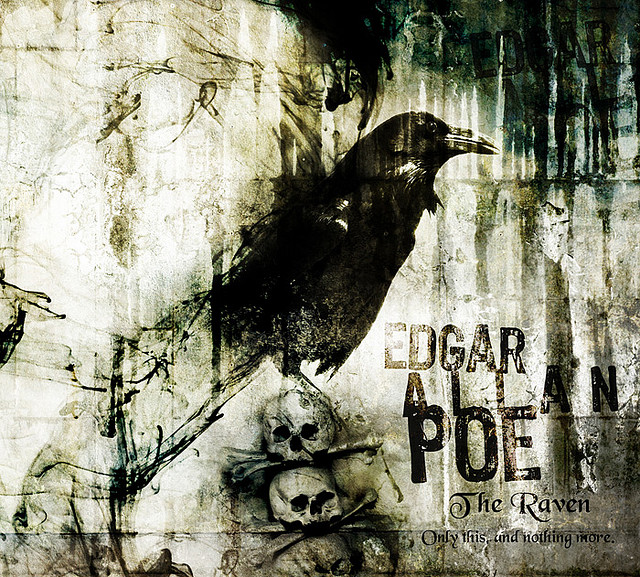 Edgar Allan Poe was not happy — of course, he was never happy. That’s what made him Poe. If Poe ever felt like whistling the tune to “Walkin’ on Sunshine,” he’d have to make sure no one was around. He had an image to maintain.

But this time, Poe was angry, just dripping with contempt.

“Cusack?” he said. “They picked John Cusack to play me? What effrontery. If that fellow has ever gotten within a half-mile of a vial of opium, then I’m Catherine the Great.”

Poe looked up and saw Catherine the Great herself sitting across the table gnawing on a mutton chop. “Sorry,” he said. “Figure of speech. But you know what I mean. Cusack? Just look at him. He’s not anything like me. He’s way too … potato-fed. Why couldn’t that have gotten Johnny Depp?”

“Depp’s way too overexposed already,” said Rasputin, sipping absinthe. “C’mon, the guy can’t play everybody. Besides, you’re an alcoholic creep who married his 13-year-old cousin. Not exactly a superhero.”

“I know what you mean, Mr. Poe,” chimed in Sylvia Plath. “I will forever be linked with Gwynnie Paltrow. Ick. She’s soooo annoying.”

“Yeah, and I got Leonardo DaVinci, or whatever his name is,” growled J. Edgar Hoover. “Guy’s way overrated … not to mention a communist.”

“OK,” said Poe, working up a head of steam. “First, nobody saw either of those movies. They both sank as fast as the bloody Titanic.”

“Hey,” said Capt. Smith of the Titanic in the parlor drinking
Advertisement
a brandy. “I can hear you, y’know.”

“Forgive my poor taste,” said Poe, rolling his eyes. “Second, at least those movies, as faulty as they may have been, were honest attempts at biography. You know what this new movie about me is? They’ve turned me into some kind of crimefighter. They’re just making stuff up. Like I’m Sherlock Holmes or something! And, guess what, Sherlock Holmes isn’t real.” Poe stands up and shouts, “Is Sherlock Holmes in the house?”

“All right, you little freak,” said Teddy Roosevelt. “You made your point. Look, the same thing is happening to Abe Lincoln and you don’t hear him bellyachin’, do ya?”

Poe turned to Lincoln, sitting at the head of the table. Lincoln said nothing, but gave one of those whaddya-gonna-do? shrugs.

“What an outrage,” fumed Walt Whitman. “How can they turn the greatest man in American history into some silly cartoon figure? What’s next, Thomas Jefferson, Masked Avenger’?”

“Would that be so bad?” said Jefferson, hiding behind his wineglass.

“Wait a minute,” said Poe. “Mr. Lincoln, sir, aren’t you the subject of a huge big-budget Steven Spielberg movie to be released this year, written by no less than Doris Kearns Goodwin?”

“And who is it that will be portraying you?” said Poe.

“It is Mr. Daniel Day-Lewis,” said Lincoln. “Tom Hanks wanted the part, but I had to let my displeasure at that notion be known.”

“Who cares if they do vampire hunter movies about you? Who cares if they put you in a pink dress singing Broadway show tunes? You’ll already have your handsome, respectful Spielberg biopic in the bag. With me, all I got John Cusack or that one photograph everyone keeps showing of me with the big forehead. Man, I hate that photograph.”

“They’re also saying that you may have been gay, Mr. Lincoln,” said Emily Dickinson.

“Well, is that so implausible?” said Lincoln. “True, I was Gloomy Gus much of the time, but there were a few moments …”

“I’m with this funny lookin’ Poe fella on this one,” said Harriet Tubman. “I didn’t die famous just so some Hollywood nitwit could steal my name to use on some test-marketed fairy tale. Unless they cast Halle Berry, then we’ll talk.”

Just then, Walt Disney walked in, having just come back from the men’s room, whistling “When You Wish Upon a Star.”

“Hey Diz,” said Poe. “This new movie is turning me into a 1840s version of Dexter.’ Why are these Hollywood stiffs messing around with our lives?”

“Well,” said Disney with a smile, “it appears that the imagination industry has run out of imagination. They’ve convinced themselves that people are too lazy to tolerate new characters and new kinds of storytelling, so they are raiding the cultural closet — that would be those of us lucky enough to be icons — to keep up the payments on their Aspen McMansions. That’s my guess. My feeling is that we should happy that we’re remembered at all. Count your blessings you’re Edgar Allan Poe and not Joe Blow … or should I say, Edgar Allan Blow.”