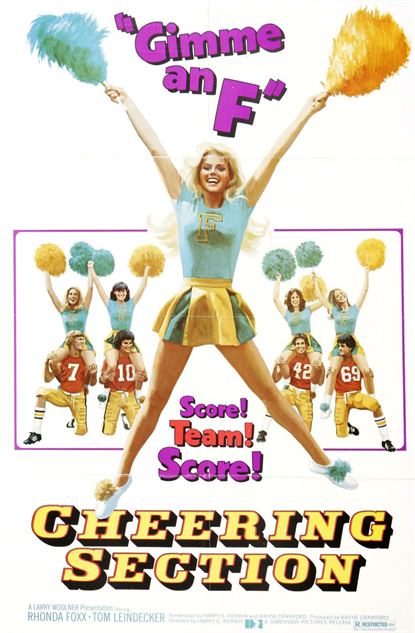 As any aficionado of 70’s cheerleader movies can tell you, the “genre” can really be broken up into two parts–the earlier cheerleader movies. that followed the original “The Cheerleaders”, which were pretty much pure softcore sex romps aimed at dirty old men, and the ones that followed “The Pom-Pom Girls”, which were aimed at least partially at actual teenage drive-in movie-goers, so they had less sex and took more frequent breaks from ogling nubile female cheerleaders to engage in a lot of free-spirited teen hijinks. This movie is obviously more like “The Pom-Pom Girls” (not that there’s nothing here for dirty old men to enjoy) in that the main protagonists are a group of ridiculously overaged high school jocks who all co-own a boogie van which they put pussycat stickers on to indicate each of the girls they’ve scored with. The conflict comes when one of the boys actually falls in love with the new girl (Rhonda Foxx), who also happens to be the strict, new coach’s daughter.