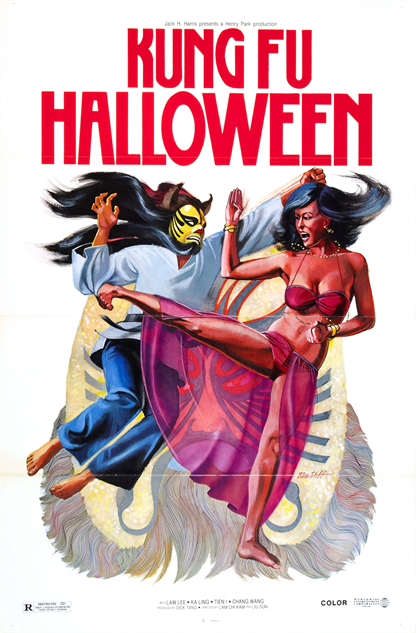 Polly Shang-Kwan is Chi Po Chun, a woman who is determined to study kungfu at Shaolin temple. She will not settle for any other teaching. I’m not sure why.

Two rookie monks who haven’t started their kungfu training yet (still at the “carry water for one year” stage) note Chun at the temple steps praying to be admitted. They decide to trick her into carrying their water by telling her they’ll train her.

Noticeable from the start is that the monks of Shaolin temple are weak in this movie. Ten students disguise themselves as their renowned masters and go to Shaolin temple. They speak to the head abbot, asking about the “Dao Mo Classics”, a collection of ten secret magical kungfu manuscripts. The head abbot says they are in the temple. One of the “masters” says he heard it was stolen and demands to see it to satisfy their worry. The head abbot retrieves it, gets taken out with a single sucker punch and each of the fake masters abscond with one of the books.

While Chun is carrying water she meets an old hermit who lives in a cave outside the temple. Turns out he was the temple’s lead martial artist and master of all ten disciplines of the Dao Mo Classic. Chun agrees to bring him water regularly.

The two rookie monks shenanigans are discovered and they are sentenced to carry water another 3 years. But the temple still won’t admit Chun since she’s a girl.

The old hermit, sitting on the temple roof for some reason, hops down and says he’ll teach her. The temple’s useless head abbot basically says, “Hey, that’s great old master. By the way, since you’re here, I should tell you some people came and stole the Dai Mo Classics right out from under me.” Understandably upset about the temple’s plunging reputation the old master says he will train Chun in the Dai Mo arts so she can retrieve and return the ten books to the temple.

They begin training and the movie, goofy to this point, gets downright absurd. One Dai Mo style is “hand”. Beyond the usual cool hand movements it also teaches the user to stretch their arms like Mr. Fantastic. The first time Chun does this in her training, accompanied by a ridiculously cartoonish spring sound effect, you kind of scratch your head.

Then she does the same thing with her feet, having learned the “leg” discipline of Dai Mo. Other shots of her learning the disciplines include her either inhaling or exhaling a huge amount of smoke, (I couldn’t tell which) and busting rocks over her head.

Everything’s going groovy until she grows a mustache. Old Uncle laughs at her panic and explains that’s the normal result of one of the disciplines, “Positive Kungfu”. Studying the “Negative Kungfu” discipline will balance this out. Unfortunately the old master has forgotten Negative Kungfu.

Not wanting to listen to her scream about it he decides to fake his death. The temple coats him in gold and sticks him in a hall with other dead masters who were also embalmed.

Chun takes the two rookie monks as her assistants and goes out looking for the 10 books, particularly the Negative Kungfu book so she can reverse her budding masculinity.

This is a typical oddity of kungfu movies. For a girl to appear to be a man, she simply dresses like one. To our eyes she then simply looks like a hot girl dressed like a guy. But other characters in the movie completely buy that she’s a guy. Even in their inn room when Chun is hanging out with only a linen wrap up top (leaving it hard to miss her feminine assets) men think she’s a guy.

The middle part of the movie follows Chun battling the thieves, capturing them and retrieving the books. More weirdness is that evil folks twist Dai Mo disciplines. The Hand guy can’t shrink his arms back, the Head guy walks around upside down, etc.

Chun returns the books and thieves to the temple. The thieves are interned for reform. The real masters now show up, indignant that their students have been incarcerated at Shaolin.

The head abbot and monks are sent running again and then, for no real reason to the story, four of the masters are shown in one-on-one contests with Shaolin animal style masters (dragon, tiger, snake and crane).

The movie jumps again to the masters running into an inner courtyard where they face Chun. She wallops a couple of them in combat and they decide they can’t beat her that way. They must form the Shantung Battleline.

The movie, ridiculous up to this point, then impresses by increasing the absurdity. The ten masters, intended to be awe-inspiring, line up single file and start odd synchronized stepping that looks like the Loco-Motion.

Meanwhile, again for unknown reasons, the two rookie monks have retrieved the gold-embalmed body of old master, who is still alive, and bring him out to the courtyard. Inside a huge urn. Why they put him in the urn to bring him out, I have no idea.

The Shantung Battleline actually takes to the air, somehow achieving even more absurdity, and goes slowly towards Chun. Nothing about the Battleline has been fast. Chun could have disrupted it at any time but just stood there watching. As the Battleline goes airborne, so does the urn! The urn flies and collides with the Battleline. The urn shatters and old master lands on the ground laughing. The masters all fall about.

Running time is suddenly of great concern because, without further ado, old master declares the thieves reformed and orders them returned to the masters. He then coughs blood and dies. The last 60 seconds of the film are as abrupt as that.