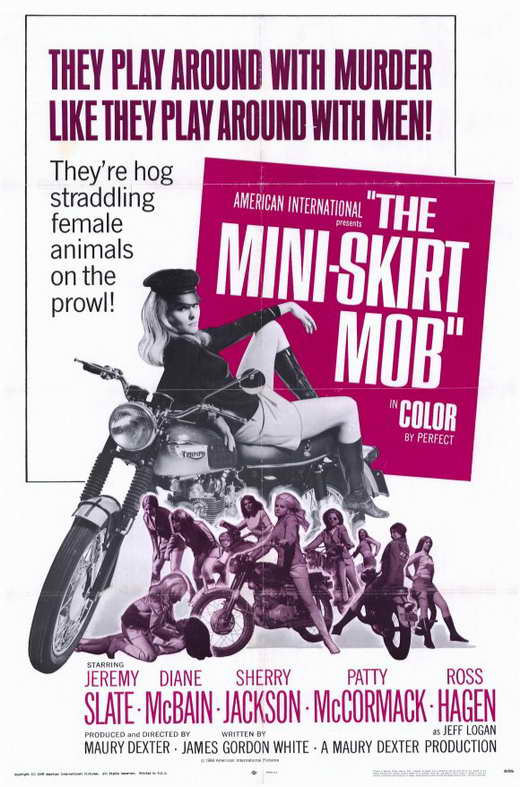 Actress Diane McBain plays Shayne, the leader of a group of female bikers, who call themselves the Miniskirt Mob. Shayne’s ex-beau, rodeo star Jeff Logan (played by John Wayne clone Ross Hagan), dumps her to marry another woman. Crazy with jealousy, Shayne is hellbent on harassing Jeff and his new bride. And she enlists the help of her motorcycle gang, which includes her younger sister, to accomplish this.

This film is brimming-over with campy, late-60s energy. The women in the Miniskirt Mob, all wear the shortest of miniskirts, that women wore back then. They all have drop-dead gorgeous bods, and wear mile-high hair-sprayed ‘dos, go-go boots, and heavy facial make-up. These women look more like 60s Vogue models, rather than tough biker chicks. Their boyfriends, who are allowed to ride with the gang, are all one dimensional oafs. These dudes drink copious amounts of beer, belch, and generally act like crude goons.

Diane McBain as Shayne, is the only cast member that truly conveys a menacing personality. The other characters seem milquetoast by comparison. Ross Hagan as Jeff Logan, gives a particularly stilted performance. Patty McCormick as Shayne’s sister Edie, does gives a decent performance. She really makes the toxic sibling rivalry between Edie and Shane, seem credible. The only other cast member who gives an interesting performance, is Harry Dean Stanton. Harry plays the dim-witted cowboy, called Spook. He infuses Spook with a haunting, pathetic, yet smarter-than-he-looks quality.

The scenery in the film is gorgeous, but the lighting is a bit garishly bright. There’s lots of vivid color contrasts, which gives the film quite a visual punch. The viewer can really get a sense of how uncomfortably hot the characters felt, as they sped down the highways on their bikes in the scorching, southwestern sunshine. There’s also plenty of panoramic camera angles. Especially when the characters are racing around hairpin curves, while biking along deserted back roads.

This film is hilarious at times, and can also be downright annoying in some scenes. The camp factor is definitely there though, for those who like these sorts of 60s B movies. Overall, it’s an entertaining film, and definitely worth a watch, especially for Diane McBain fans.