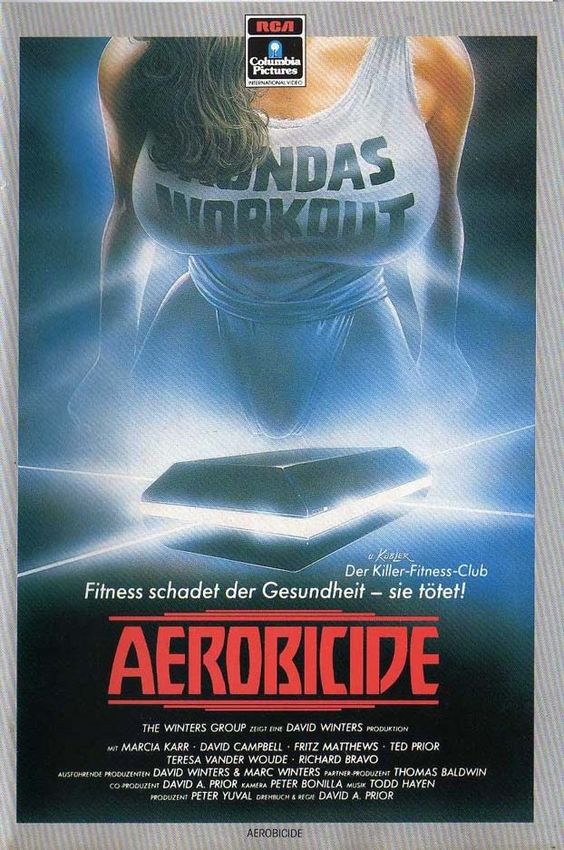 Best described as a cross between a splatter movie and a CHER fitness video (!), AEROBICIDE (as it’s known in the UK) tells the tale of a psychopathic nut that is killing the members of a fitness class one by one with a giant safety pin! (But that’s where the originality ends believe me!)

The plot opens with a gruesome accident, which is possibly the flick’s only highlight. A young girl is tanning in a sun bed, when all of a sudden it malfunctions and locks together, causing the hapless and unsuspecting victim to get, well just a little bit over tanned! Sadly from here the plot goes downhill drastically!

We are now introduced to Rhonda (Marcia Karr) the grumpy owner of a gym and a group of happy go lucky fitness fanatics who ‘work out’ to music that words can barely describe. I suppose you could call it a mix of eighties bubble gum pop with a large helping of mature cheddar cheese, but to be honest i dont think this music has got a genre of it’s own. It’s a new style! Check these lyrics out for instance: “She’s a knockout, you better watch out, She’ll take you out”… Hardly Leiber and Stoller is it! Anyway back to the aerobics class who manage to stay smiling and working out throughout the whole film, even after 11 bodies have been found mutilated in their gym! I honestly thought that even if only one person got murdered in a public leisure centre the police would close it down to investigate, but certainly not at this one! While the coroner raps the corpses in body bags, the class boogies away without a care in the world or even the slightest mention of the recent brutal murders! What a brave bunch!

Now I know it’s customary in a slasher movie to show the odd bit of T&A, but KILLER WORKOUT manages to completely pad the film full of it! There must be twenty or more female characters in the film and I can’t remember any of them except for one wearing any more than a leotard! And they even try to justify this by an insane twist in the story! Director Prior does his best to keep a bit of cleavage in every shot including most of the murder scenes.

It does not take long for the unseen killer to get hastily back to work, armed with a giant safety pin! At least they thought of an original weapon, even though a pin is hardly the most terrifying thing in the world! One thing this movie does have going for it is a massive bodycount, 13 to be exact; but even if a hundred people got killed I dont think that this could be any better. I’m afraid KILLER WORKOUT is a real wet turkey! The acting is terrible as you might imagine, and the whole thing can’t help but feel rushed and put together with minimal thought.

Another great ‘cheese point’ of the flick comes in one or two fist fights that are down right hilarious. In one of them private investigator ‘Chuck Dawson’ (Ted Prior) and another goon ‘Jim Callick’ (Fritz Matthews) scrap it out for a couple of minutes , non stop punching each other flat out in the face! When the brawl ends, neither of them is even slightly marked! Maybe they’re cyborgs! Another classic is the second murder scene. A girl in the shower gets repeatedly stabbed by the giant safety pin, Michael Myers style. As the camera reels away to show us the victim dying, she hasn’t got a scratch on her either…it’s unbelievable! You are just spoilt for cheesy moments in this film; check out the bit where one of the aerobics girls takes Chuck back to her house. She tells him to wait outside while she gets changed. He makes a ten second phone call and then she reappears completely changed! Even Superman’s phonebox fanatics would have a job to beat that!

KILLER WORKOUT is a bad movie. It was obviously made on the smallest budget imaginable, which is probably why it’s so terrible. But I must admit it brought a smile to my face on a few occasions! Depending on how you take your eighties horror movies KILLER WORKOUT could be the gem you’re looking for. It’s certainly big on laughs (not to mention hair!) But those of you who truly watch horror films to be scared will end up disappointed!