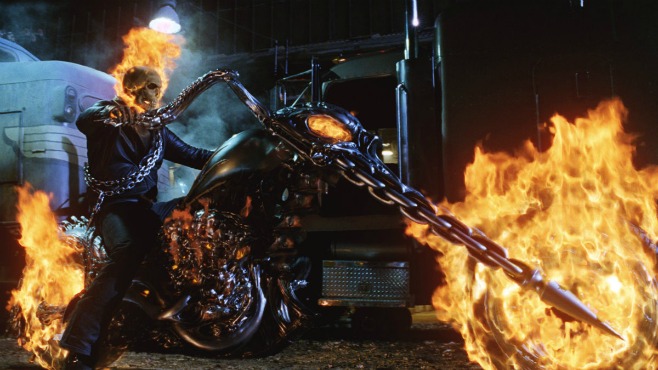 Ghost Rider, a character invented in the early 1970s, is, I think we can all agree, really cool-looking, but that’s about where the logic of his invention ends. Why not have a leather-clad biker, with a flaming skull for a head, ride around on an enchanted motorcycle, threatening criminals? That image was good enough for the character’s inventors, I suppose, as his origin is a little strange. It turns out, at least according to the 2007 film about him, he sold his soul to the Devil (played by Peter Fonda), who enlisted him as a superhero. Ghost Rider’s powers include the ability to stare into a person’s eyes and make them feel horrible guilt for the wrongs they have committed. He tracks down bad guys and sends them to Hell. Neat idea, I suppose, but the morals get a little mixed. Shouldn’t the Devil be more concerned with causing mischief and evil in the world? If he was enlisting a living biker tattoo, shouldn’t Ghost Rider be a tortured demon who has to commit evil acts, and not a noble punisher, acting in the interests of vengeance and justice? Ghost Rider is positioned as a peerless hero, and that seems strange to me. When the Devil offered to take away his powers at the film’s end, Ghost Rider (played by a lugubrious Nicolas Cage) refuses for no discernible reason. But then, his film is pretty lousy, so not too much thought should, perhaps, go toward this.