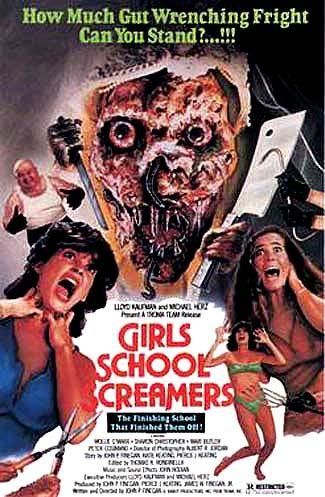 7 girls from the local Catholic school are chosen to go inventory the Wells estate, which has been left to their school by one Tyler Welles. It sounds like a fun weekend (I guess) until the girls hold a séance to try and contact Jennifer Wells, a 20-year-old who died mysteriously on the grounds in 1939. Their weekend gets even stranger when it is revealed one of the girls, Jackie (Mollie O’Mara), is a dead ringer for the deceased. This Troma pick up (originally called PORTRAIT) is something you could see Roberta Findlay making, except for the lack of any blood or nudity. Debuting director-producer-writer John P. Finnegan seems to forget he is making a cheap exploitation movie, so there is very little appeal here. There is a tacked on opening that looks as if it was added later to push up the monster factor. Finnegan scored better as writer-producer with the JAWS-inspired comedy BLADES (1989), which is also released by Troma.