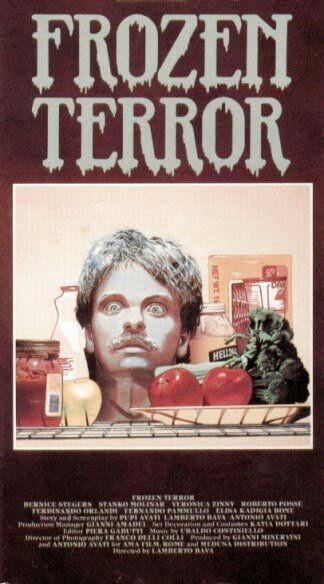 You gotta admit, the idea is ingeniously twisted in its simplicity…

Jane (Bernice Stegers), an adulterous New Orleans housewife, is involved in a car crash that decapitates her lover. One year later, she is discharged from a mental hospital and returns to her lover’s former residence, where she is lusted after by blind caretaker Robert (Stanko Molnar) and plagued by visits from her Greyhound-faced daughter Lucy (Veronica Zinny).

Questions arise: What is the explanation for those lustful, lovemaking noises coming from the upstairs apartment? Why is Jane so protective of her freezer? Will Robert ever get a chance to tap that action? Will Lucy ever shut the f*ck up? With strong location shooting in New Orleans and an accompanying jazzy score, you can practically feel the sweltering menace in the air.

True to its title, “Macabre” is generally restrained in tone, instead opting to create a very effective mood of overall bizarro. At its best, it has the feel of a polished anthology entry (such material would be right at home on “The Twilight Zone” or even “Masters of Horror”); at its worst, it feels overlong and silly. The third-act twist, while pretty predictable, works because the cast is so ravenously committed to the material. As a result, “Macabre” is a finely polished debut from Lamberto Bava (son of Mario), suspenseful and mysterious (in a supernatural kind of way), but just too overdrawn.