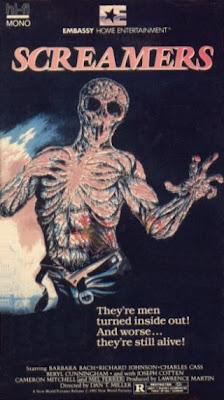 Devoted reader Craig Edwards has requested the story of how schlockmeister Jim Wynorski (whose next low-budget release is Gila!, about the attack of a giant lizard) got his start in Hollywood. So I’ve cribbed from my Roger Corman: Blood-Sucking Vampires, Flesh-Eating Cockroaches, and Driller Killers the following run-down of Jim’s unparalleled career. Mr. Craig, this one’s for you!

Jim Wynorski, once who told Time Magazine that “breasts are the cheapest special effect in our business,” was born to thrive in the giddy environment of Roger Corman’s New World Pictures. Corman was already a hero to Jim when, as a young man with an advertising background, he visited Roger’s wife Julie to pitch some story ideas. He walked out with a job as New World’s head of marketing, and from then on he was a Corman regular. As he told me, “I got caught up in it so fast, it was like a twister coming by. That’s the world an impatient person like me loves to work in. Because it’s instant gratification.”

Wynorski’s first big success came when, on a $40 budget, he re-cut the trailer for an unsuccessful Italian-made New World horror film called Something Waits in the Dark (1979). Wynorski’s trailer, which lured ticket-buyers with the promise of seeing “a man turned inside out,” incorporated new footage of “this guy running around, covered with slime, all his veins hanging out, chasing a girl in a bikini.” The film, re-titled Screamers, opened in Atlanta on a Friday. Early Saturday morning, Corman phoned Wynorski and demanded that his new material be edited into the film itself. He needed to appease the disappointed audiences who “rioted in the drive-ins last night, tore out the speakers, tried to lynch the manager.”

After Corman spotted Jim’s gift for tapping into the male subconscious, Jim was put to work concocting scripts that featured action, comedy, and women without clothing. Before long, he was also a director. Wynorski’s exuberant “Let’s-Put-On-a-Show” approach is especially evident in the making of Sorority House Massacre II (1990), also fondly known as Nighty Nightmare. It seems that the house sets from Slumber Party Massacre III had been left standing at the Concorde studio. On a Friday afternoon in late May, Wynorski secretly got Julie Corman to stake him $150,000. He spent three days writing a quickie slasher flick, and two more days casting actresses who were game, well-endowed, and not members of the Screen Actors Guild. By Friday, with the Cormans out of town for Memorial Weekend, Wynorski was shooting. The following Wednesday, Corman finally discovered what was going on. He saw the finished product, recognized its commercial potential, and said, “Jim, I want you to make this film again. Use the same script, use the same cast.”

Because the original sets were now gone, this follow-up took place in an office tower, fictional home of the Acme Lingerie Company. It was called Hard to Die, and fans like critic Joe Bob Briggs celebrate its excesses: “Sixteen breasts. Twelve dead bodies. Hot pants. Tube tops. Denim cutoffs. Camisoles. Bustiers. Bimbos drenched by fire sprinkler system for an extremely apparent reason. Neck-cracking. Multiple splatter. Gratuitous flashback footage from Slumber Party Massacre.” Corman was delighted by this seat-of-the-pants moviemaking, which reminded him of his own early days. Wynorski is convinced that he and Roger share the same film aesthetic: “Big chase and a big chest. That’s the formula.” Says filmmaker Joe Dante about the unlikely pairing of the dignified Corman and the outrageous Wynorski: “Jim Wynorski is the side of Roger that he may have inside, but he never lets anybody see.”