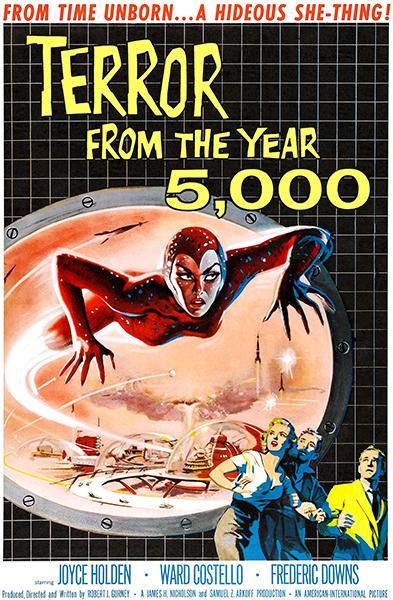 I could take all the giant ants, scorpions and spiders, all the ghosts and haunted houses, the numerous editions of frankenstein monsters and invaders from space pretty well. For some reason, though, nothing frightened me more or stayed with me longer than the rare feminine monsters. Perhaps it was because women were always the loving caregivers (Mom, Grandma, my teachers, my sisters). When sick, or waking from a nightmare we always call for Mom. So, I think the idea of a woman being a vicious, scary thing was such a perversion of all I otherwise knew, the effect on me was especially chilling. I had no problem with the mutilated faces of men as in ‘Horrors Of The Black Museum’, ‘The Black Sleep’, ‘The Unearthly’ and so forth. But the visages of the female victims in ‘The Hypnotic Eye’ and of the niece in ‘Frankenstein’s Daughter’ always made me squeeze shut my eyes.

‘The Astounding She Monster’ is a prime example of these fears – a malevolent, radioactive female relentlessly stalking me, her touch meaning sure pain and death. From the age of seven until seventeen, that particular luminescent character showed up in my nightmares. But the single most frightening thing I ever saw was the female terror that came shrieking out of the time machine in this movie, arms pumping in a marching style, coming right at me. Peeling off another woman’s face to wear as a mask was incredibly disturbing. Yep – this was the single-most terror of my childhood movie-viewing. I couldn’t even bring myself to keep my eyes open for more than half a second when the movie closes with a close-up of this hideously deformed feminist with a wicked widow’s peak. Even at the age of sixteen, surrounded by buddies watching it on the late show, my body kept freezing with fear, though I didn’t mention it to them.

Going by most of the reviews here, today’s audiences, accustomed to the most graphic horror, just find this monster boring. But I’m still scared of this terror from the year 5000. Oh yeah, and the four-eyed cat gave me the creeps pretty good too.