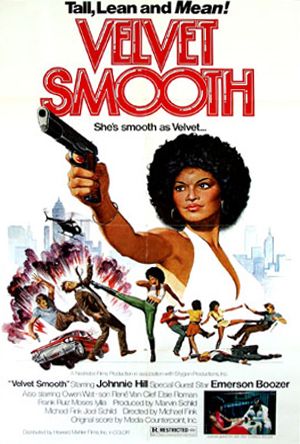 For a low-budget 70’s martial arts film, I thought it was pretty entertaining. The soundtrack is really a hoot, as are the sets and costumes. I especially enjoyed the scene where King and Velvet are on the sofa and you can actually see the audio boom shifting back and forth at the bottom of the screen! When Velvet speaks her line the boom points at her and when King says something, the boom races back toward him–hilarious! I noticed that the casino bouncer is one of the “family” from “Super Fly”. There are some amusing parallels: Velvet takes off her bracelet at home, cut to bracelets being stolen at the casino robbery. Also, during the fight scene on the top of the MTA building, the costumes match the colors and shapes of the heli-pad. I thought the Kojak lookalike was a really strange touch and whatever they were using for stage blood looked like marinara! Fantastic!