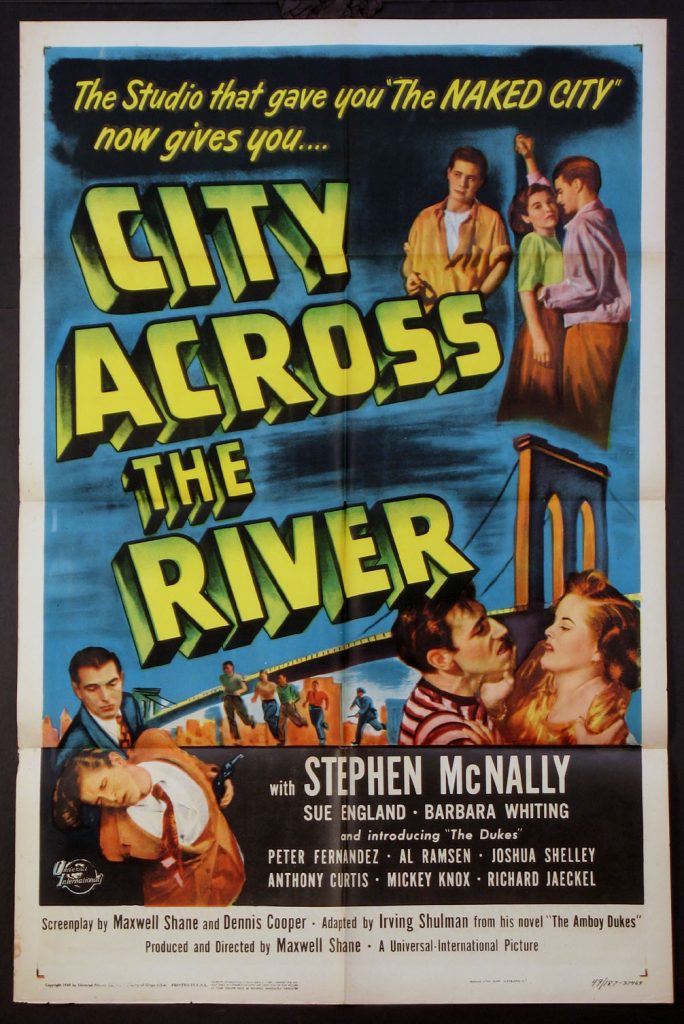 hile the noir cycle sensed, in its oblique way, most of the tremors affecting America in the post-war years, one subject that remains conspicuous in its absence is juvenile delinquency. Though alienated youth cropped up now and again  in The Big Night, in Moonrise, in Talk About A Stranger and even, arguably, in The Window  they were viewed as individual cases, not as a social phenomenon. (It wasn’t until the cycle had largely petered out that such films as The Blackboard Jungle and The Wild One emerged in the mid-1950s.)

One exception was City Across The River, based on Irving Shulman’s novel The Amboy Dukes. Though noirish in its look and urban setting, it’s probably safe to call it a social-message movie (as was Nicholas Ray’s Knock On Any Door, of the same year). It takes us to the slums of Brooklyn at a time when slums were slums and when conventional wisdom held that the root of juvenile delinquency was the turn-of-the-century tenements themselves  the physical plant, not the inculturated attitudes that perpetuate the culture of poverty and crime.

Peter Fernandez plays the central character of the story, a teen-ager whose parents work holidays and double-shifts to make ends meet (his mom is Thelma Ritter). But he hangs around with members of a `club’ called The Dukes (among them `Anthony’ Curtis), whose older members seem to be rising lieutenants in the world of petty crime. Of course, in accordance with the official idiom of the times, the toughs caper and cavort like The Dead End Kids, and the worst epithet they hurl at one another is `you crumb.’

Fernandez and friend confront a shop teacher who’s responsible for their suspension and accidentally kill him with one of the zip-guns that seem to be the main enterprise of the school’s industrial-arts program. In fear and panic, they not only raise suspicion but burn most of their bridges behind them. The movie ends unsentimentally  even harshly.

The task of directing fell to the unlikely Maxwell Shane, whose most polished credits in the noir cycle are Fear in The Night and its remake Nightmare, oneiric cheapies that created a fantasy world. Yet he does surprisingly effective work in City Across the River, putting together a plausible neighborhood of vegetable peddlers, candy shops and pool halls. Despite the dated and bowdlerized street argot, the movie stays involving and humane without retreating into cliche (Fernandez’ fall isn’t assigned an easy scapegoat) or crocodile tears.