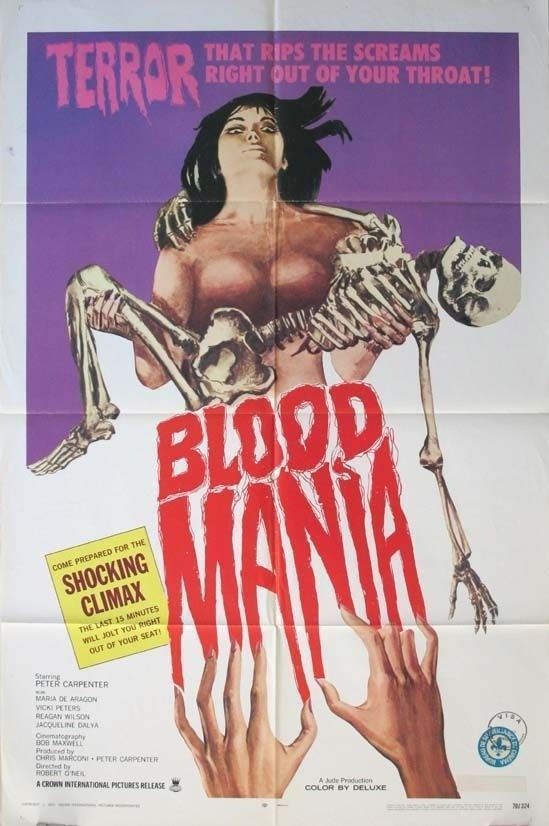 The greatest moment in “Blood Mania” is the point when you come to realize that the writer and lead actor of this terribly inept movie is actually one and the same person! So, in other words, this dude – Peter Carpenter – probably couldn’t care less that the overall film is dull & derivative, because he arranged for himself that he could smooch and fondle the perky breasts of no less than three extremely cute and luscious women! Nice going, Peter! Hey, I certainly don’t blame the guy because a) apparently he died quite young about one year after the release of this film, and b) at least “Blood Mania” is a lot more watchable than the other movie he wrote; “Point of Terror” starring Dyanne Thorne. Carpenter depicts Craig Cooper, a hunky and successful private physician with a stunning redhead girlfriend, but he’s being blackmailed by a sleazy thug who knows that he performed illegal abortions in the past. One of Craig’s patients is a wealthy private clinic owner with a nymphomaniac daughter named Victoria. Her insatiable sex-hunger is marvelously illustrated near the beginning of the film, when she jumps the pool boy who literally screams for his mother! Victoria wants to kill her father with drug aphrodisiacs and share the inheritance with Craig, but only if he promises to remain her personal sex toy forever. Complications arise when the inheritance unexpectedly goes to deceased’s other daughter Gail. Luckily for Craig, Gail is another very beautiful chick that also easily falls for his charms, but obviously the mad raving Victoria will not allow this romance to happen! Okay, so Where’s the blood? Where’s the mania? I’m actually convinced that this could have been much better, if only they focused more on the atmosphere and plot instead of the on the bare chests of the female cast members. The opening sequences hint at psychedelic situations, but the rest of the film is slow-paced and full of redundant dialogs. There’s a bit of nasty bloodshed near the ending, but the actual finale is dumb and unsatisfying. The constant “music” is irritating and the best characters (like the witty nurse) get neglected. Worth seeing only for the continuously exposed boobs of Maria De Aragon, Reagan Wilson and Vicky Peters.