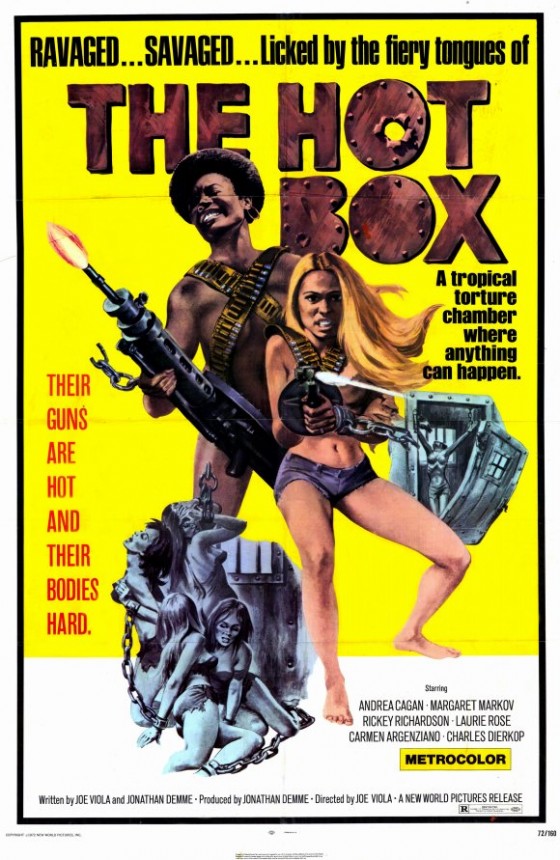 As other reviewers have already mentioned, “The Hot Box” has been mis-marketed as a Women-In-Prison film, when in fact it is a low-budget action film with four American nurses getting caught up in a revolution taking place in the “republic of San Rosario”. This was one of the earliest scripts that Jonathan Demme (“Silence of the Lambs”) wrote in his career, and personally I found the structure a bit heavy-handed. I assume that the goal was to make the viewer root for the revolutionaries and against the oppressive government, yet for the first half of the movie most of the revolutionaries we meet are little more than cackling sex maniacs! And even the more “civilized” ones treat the four American women – who are nurses, mind you, not their enemies in any way – pretty horribly. In the second half, they are subjected to even worse treatment by the government side, and finally the revolutionaries are starting to come off as “the good guys” (by default!). Wouldn’t it be wiser to try to build more sympathy for them earlier on? I also didn’t like the small comedic touches in the film, they felt awkward given the generally grim and unpleasant content. What I did like are the four female leads, who make a likable and good-looking team; their unabashed nudity is most welcome. Is it just me or would Margaret Markov (who plays the most “idealistic” of the four) have been perfect for the part of an angel in a fantasy?