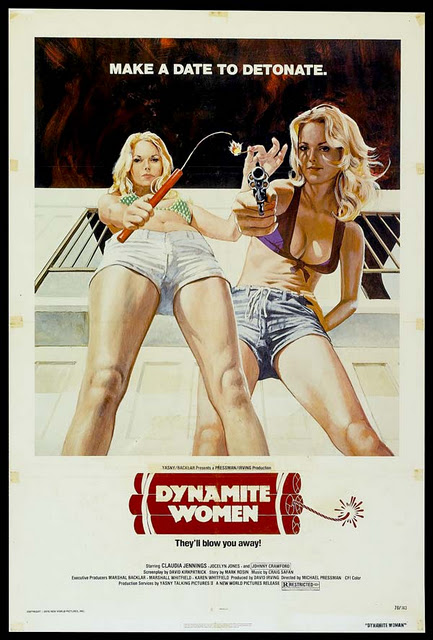 Busting out of prison, sexy blonde Claudia Jennings (as Candy Morgan) gets out of her jumpsuit and robs a small Texas bank, with lighted sticks of dynamite. Ms. Jennings is assisted by sexy blonde bank teller Jocelyn Jones (as Ellie-Jo Turner), who has just been fired for “total lack of character.” Lingering in bed with men causes Ms. Jones to be late for work. Later, Jennings picks up Jones hitchhiking. The two tightly outfitted women decide to team-up and become a modern day “Bonnie and Clyde” (or “Bonnie and Bonnie”). They meet ex-“Riflemen” cowboy Johnny Crawford (as Slim) robbing a convenience store, and take him hostage. Knowing good gigs when he sees them, Mr. Crawford makes the dynamite duo a threesome.

This is an excellent “exploitation” flick, thanks to the deft comic performances of the stars, and sneaky direction by Michael Pressman. Jennings and Jones are fantastic (both as a duo and a quartet). Jennings, who so sadly died in a car crash, was rumored to be considered for “Charlie’s Angles” (replacing the departing Kate Jackson); and here, she looks like a combination of Farah Fawcett-Majors and Shelley Hack. All of these women had a refreshingly natural, sexy look. Lip and breast injections were not needed. Crawford provides a perfect male attachment for the women, with “Dark Shadows” star Chris Pennock (as Jake) and lucky bellhop Eric Boles (as Johnny) also appearing. And, all three men show off their nakedness, too.

The film is a success while it stays fun and sexy. You see a lot of explosions during the running time, but without the relative bloodiness, which helps keep the tone light. Generally speaking, everyone runs away before something blows up. All of this is tossed aside for a scene involving Crawford, Jennings and a couple of cops. Then, the film’s tone changes too sharply. Also, the scene (you’ll know it when you see it) looks fake. Too bad it wasn’t better when it got bad, but when “The Great Texas Dynamite Chase” is good, it’s very, very good. Having met Crawford and Pennock, and not mentioned this film, you guys should be proud