The screen is silent. With the absence of noise or music, the camera floats elegantly over the Austrian Alps. Craggy peaks and lush green valleys are revealed. Small quaint villages and beautiful pastures are shown. Slowly we rise towards a grass-covered peak. We get closer, it is a young woman, her face erupting in song. She begins to twirl. Music erupts and the first notes of a song flow out.

It was announced that Disney was now denying access to certain theaters of Fox’s and Disney’s movie library. Disney has now decided to place movie theaters into two separate categories: “repertory” or “commercial.” If you’re a commercial theater/first-run theater, you can screen Disney’s new release movies, but you can’t play anything from its giant library. If you’re a repertory theater, the deal reverses. The powers that be have mandated that a theater can screen Disney’s old movies, but not its new ones, you must choose. Disney has notoriously been stingy with access to its library, after the merger, Disney extended that stinginess to the Fox library. The rule is simple, if you run first-run pictures then you have no access to Disney’s repertory titles.

For years, independent theaters have been able to screen old movies from 20th Century Fox’s more than impressive catalog, an archive of more than 2,000 films that stretches from the silent era in the 1920s all the way up to the present day. It’s what allows your local movie theater to play Die Hard and Home Alone at Christmas. No more. Losing access to the Fox catalog would mean losing Butch Cassidy and the Sundance Kid, Cleopatra, The Hustler, M*A*S*H, The French Connection, Cast Away, Moulin Rouge, The Fly, Raising Arizona, The Princess Bride, The Abyss, in short, it is a tragic loss for theaters and for moviegoers. It is a deep loss and denies our society access to a key cultural asset.

One side effect of this Disney policy benefits independent exhibitors who don’t otherwise play Disney titles. They now have the advantage over bigger chains, who are now cut off from playing class Fox titles. It will be interesting is how first-run chains like Landmark, Alamo Drafthouse, and Arclight, all of which book Disney and Fox first-run movies will now be affected by this new studio mandate.

An executive at one of the large exhibitors made the following anonymous statement.

We’re disappointed with Disney’s decision to close off access to its newly acquired library of 20th Century Fox films for theatrical screenings. The gates have come down on a massive library of hundreds and hundreds of films encompassing over 80 years of Fox cinematic history, an immense loss to the cultural and historical value of repertory programming. This is on the heels of Disney themselves preventing most of their great movies from being shown in first-run theatres. In the age of streaming, this is the place that families and children, friends and fellow lovers of great movies can see them in the way the producers, directors, actors, screenwriters and all the artists it takes to make a movie originally intended. It is deeply unfortunate that movie theaters will be denied the opportunity to share the joy of movies in a bonding communal setting. Denying access to classic movies and the immeasurable value of the communal experience is counterintuitive to Disney’s own ethic of creating lifelong memories through sharing experiences with others.

What immediately comes to mind is the question “how can this be legal”. How can you deny a commonly accessible product from one business and allow other businesses access? 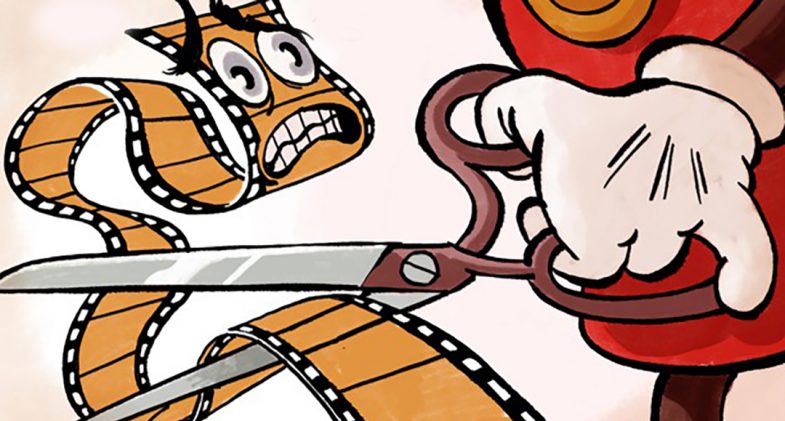 At the most basic level, “restraint of trade” is any activity that prevents another party from conducting business as they normally would without such a restraint. The doctrine of restraint of trade is rooted in English common law and codified under U.S. statutes (specifically, the Clayton Act and the Federal Trade Commission Act) and various state antitrust laws. While federal (Sherman Antitrust Act) and some state laws treat restraint of trade and other antitrust acts as a crime, parties that suffer losses from such actions may seek monetary recovery in civil court.

What is fascinating that the way a business decides to operate and to self-define what is to be sold at its premise is now being dictated by a DeFacto supplier. It is a furthering of studio controls being imposed on theaters, controls that are defining and shaping the market dynamics which at its core is totally contrary and erosive to the ideal of free enterprises. This monolithic need that the studios seem to have must be contrary to the benefit of a dynamic motion picture economy. Now the Disney ostensibly controls 40% plus of the market, it is more than dangerous for a studio to shift the playing field is such a market altering manner.

Flashback Cinema is a pretty wonderful showcasing of classic movies which has been embraced by many exhibitors across the country. Now does this preclude Flashback from working with theaters whose primary business is first-run movies in regard to Disney and Fox titles? Something is truly rotten in Denmark if this business is left to stand. It is time for NATO and the ICA to speak up on this issue and put forward a challenge to Disney.

It is time a level playing was demanded.