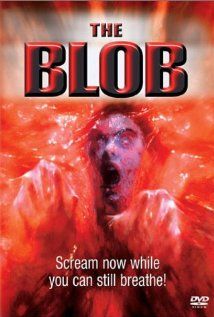 In the 1980s there were 3 remakes of Popular 1950s Horror films, first there was THE THING (1982) then THE FLY (1986) And in (1988) We got THE BLOB, which is often overlooked and considered to be the lesser of the 3 remakes, and to me that’s really sad because THE BLOB is in my opinion is Just as good as the other two remakes from the 80s, The 1950s version of The Blob is a classic B-Movie worth watching for a good laugh, as for the Remake it is a truly scary film, the suspense is there, the special effects are incredible to this day, the only effects that are dated are the green screen effects which don’t show up until the latter of the film and there’s only a few of them.

The Plot is the same as the original but with a slight twist, Like in the original, A meteorite hits earth and a strange blob creature oozes out of it and starts to devour anything and anyone in its path, the film has 2 heroes played by (Kevin Dillon and Shawnee Smith) who both do a good job with their roles, and the supporting cast is good also.

The film succeeds as being a good remake because it gives you something old and something new, it pays homage to the original without completely ripping off the original, In fact there are only 2 major scenes that are lifted from the original, but they are Done in good taste, unlike many remakes today where they just add an overabundance of scenes from the original making feel like a total repeat of the original and not add anything new, But the real show stealer is the Blob itself, the biggest improvement being the special effects, the blob has never looked more threatening or scarier.

Overall: The 1988 remake of THE BLOB is a classic but sadly overlooked Horror/Sci-Fi film, The Only problem with it is some cheesy dialog and maybe the new twist on the plot is not the best, but the biggest problem is, WHEN WILL WE GET A SPECIAL EDITION DVD/BLU RAY? It would be good to see some bonus features as well as some remastering, they could surely Polish up some of the bad green screen moments. But overall the film is a lot of fun, Highly recommended for Horror/Sci-Fi Buffs.