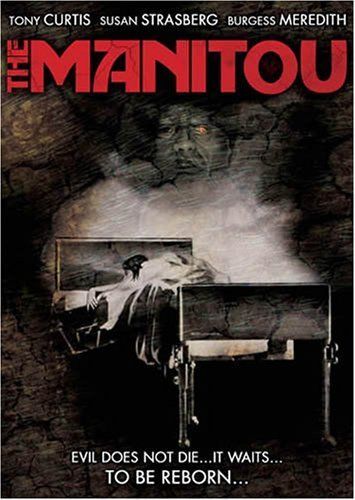 How can I begin to describe this amazing film? Random images pop into my head from memory… Tony Curtis as a dashing fortune-teller and huckster, prancing around his San Francisco bachelor pad wearing a sorcerer’s outfit… one of his elderly female clients being possessed by an Indian spirit and being tossed down a flight of stairs… (you don’t even need the pause button to see that the stunt “double” going down the stairs is a big dude in a dress and wig!!)… Burgess Meredith muddling through one of his last film roles, playing a senile old coot with amazing realism, to no one’s surprise… an Indian shaman with a Yiddish-sounding New York City accent and a penchant for stale one-liners… a naked midget dressed up like an evil reincarnated Indian fetus covered with goo… a topless Susan Strassberg hovering in the fourth dimension and firing lightning bolts at the evil spirit using electrical energy from a huge 70’s-model computer… YOU MUST SEE THIS FILM!!