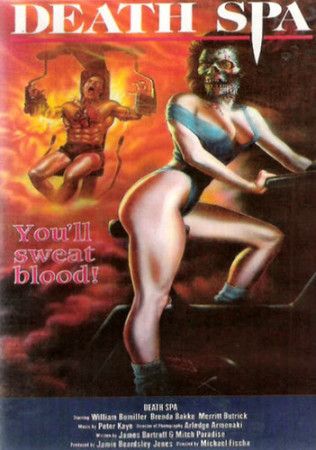 Extremely gory movie about a health spa, The Starbody,haunted by the owners Michael Evens, William Bumiller, wife Catherine, Shari Shattuck, with some of the most gut turning scenes even put on film.

The movie starts out with what at first seems like a number of tragic accidents where Michael’s girlfriend Laura,Brenda Bakke, gets blinded by what seems like a defective steam room. Later one of the costumers at the spa Darla, Chelsea Field, almost gets killed when the diving board that she was on gave way and broke. When another spa member Robert, Hank Cheyne,is torn to pieces working out on one of the exercise machines Michael as well as the police begin to suspect David, Merritt Butrich, who works in the control room which controls the exercise equipment in what’s been happening to the people at the spa.

It turns out that David holds his ex-brother in-law Michael responsible for his sisters death. Catherine committed suicide by dousing herself with gasoline and setting herself on fire because she became crippled giving birth to Michael’s child. Michael refused to let Catherine have an abortion which David feels would have prevented her from becoming crippled and thus driving her to kill herself. The movie moves to it’s final and bloody conclusion with an horrific ending that ends up killing almost everyone in the spa.

Over-the-top special effects back then, 1987, that are as good as they are in any horror or slasher movie made now makes “Death Spa” rank right up there with slasher movies like “Halloween” made back in the 1970’s and 80’s. Some of the scenes in the movie were really terrifying as well as eye-popping and there was a number of times when I said to myself watching the movie “How did they do that?”

The plot of “Death Spa” was fairly routine with Catherine’s spirit taking over her brother David’s body and doing in her husband Michael’s business, the health spa, and his friends. Especially Michael’s girlfriend Laura who Catherine felt that Michael had an affair with while she was still alive. It’s the really unbelievable special effects that makes the movie worth watching.