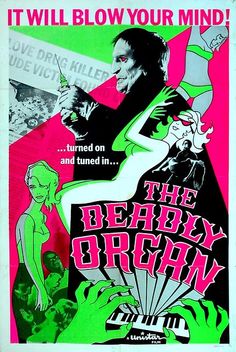 Emilio Vierya strikes again! Or to be more accurate, Emilio Vierya strikes for the first time as this was the first of a series of bizarre horror films by Argentina’s most famous (and only famous) horror director. And though Vierya may strike first-time viewers as an Argentinean Ed Wood, there is definitely method to his madness–the cheesy delirium evoked by his films is entirely intentional. A man in a ridiculous monster mask lures female Argentinean swingers partying on the beach with his strange organ music(thus the suggestive alternative title “The Deadly Organ”). He then injects them with heroin to make them his slaves. Why? You wouldn’t believe me if I told you, but it really isn’t important.

All the ingredients of a Vierya film are there–the free-spirited Latino hippies, the goofy music, the gratuitous nudity, the gratuitous dancing. His two regular actresses–Gloria Pratt and Susana Beltran–also appear. Beltran (who looks a lot like her Italian exploitation contemporary, Rosalba Neri)has the lead in this movie though, with Pratt relegated to a more perfunctory part. Thankfully, this one isn’t padded with American-shot sex inserts like “The Curious Dr. Humpp”, but unlike “Sangre de Virgenes” it is dubbed into English which is only a problem because instead of giving Beltran a sexy Latino accent, they give her this grating Texas one(!). And “Feast of Flesh”, the title this has currently been saddled with by the distributors at Something Weird is very inaccurate as there is no flesh here in the gore sense and not much in the sex sense. The Spanish title “Placer Sangriento” (literally “Bloody Pleasures”) isn’t any more accurate. Both are bound to attract your indiscriminating gore fans rather than your more refined and erudite fans of bizarro Argentinean horror/sexploitation movies who will appreciate a film like this. I guess this movie really defies ANY title, but I like “The Deadly Organ” the best.