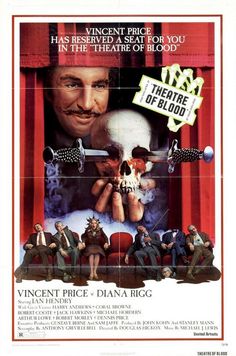 A very stylish comedy/thriller along the lines of “The Avengers,” a popular TV series at the time. Vincent Price is an actor who has survived a suicide attempt and secretly takes revenge on half a dozen critics who savaged his performances in various plays of Shakespeare. With the aid of his daughter, Diana Rigg (who was Emma Peel in “The Avengers” and one of the mean daughters in Olivier’s TV production of “King Lear”), seeks out his critics and offs them in ways appropriately derived from WS. It’s murder allright. And WS could be very imaginative when it comes to that. I once wrote out a list of the violent acts that take place in “Titus Andronicus,” the closest WS ever came to Grand Guignol, and it was as long and even more gruesome than a similar list I drew up for “Dirty Harry.” “Titus” has one of the funniest stage directions I’ve ever seen — “Enter messenger with hands.” It doesn’t mean the messenger HAS hands; it means the messenger is carrying a pair of someone else’s amputated hands! At that, they had to tame the Bard down for this movie. Instead of Queen Tamara having to eat her own children baked in a pie, the gay critic played by Robert Morley is force fed (to death!) a Cornish pasty made from his two beloved poodles.

Back to this movie, though. What a cast! Vincent Price plays it for laughs, disguised as a gay hairdresser, a Scottish masseur, a French chef, and so forth. His half-hearted, mostly losing struggle with the various accents is enough to break anyone up. The others don’t have as much screen time but they make the most of it — Harry Andrews, Dennis Price, Robert Morley, Jack Hawkins, Coral Browne, Milo O’Shea. Diana Rigg is a sight to see, I should mention. Every movement is like flowing silk. Her figure is unimpeachable and her zygomatic arches should be left to the British Museum.

It’s a well-done movie from start to finish. Vincent Price gets to do a lot of Shakespeare. He’s no Olivier or Branaugh, but it’s okay because the performance ought NOT to be very good. The cinematography is glossy and polished, the score unobtrusive. The actual look of the film is appealing — the British now how to dress in a way that most Americans don’t (but many urban Canadians do). And the writer should get some sort of special award himself. The bits in between the murders are almost as amusing as the story itself. We get to hear snippets of the reviews that torpedoed Price’s career. One of them goes something like, “I was fortunate enough to fall asleep at the beginning of Lionheart’s performance and awoke much refreshed, not having had to listen to this aging matinee idol’s rantings and posturings.” (Was the writer ripping off John Simon?) The story line is made clear, whether or not the viewer knows any of the plays. The correlations with the plays are made simply enough for an average reviewer to understand and appreciate the similarities. And the murders themselves are funny — excuse me. One critic gets drowned in a butt of malmsy — a barrel of wine — and the police establish the exact vintage afterward.