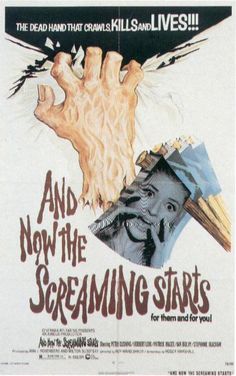 This eerie film is developed in an ancient and isolated castle and it takes place in 1795. . A just married couple goes home their grandparents during wedding night . As young Catherine just married Charles Fengriffen and moves into his castle . She becomes victim of an old curse that lays on the family . On her wedding night she’s raped by a ghost and gets pregnant . The fiancé Charles Fengriffen (Ian Ogilvy) and his fiancée (Stephanie Beacham) aren’t aware about the curse by terrible events occurred in past times and mysterious deeds are actually happening . In 1795 Silas , a young man who worked in stables attempts to avoid the violation of his young wife by the noble Fengriffen (Herbert Lom , he is second-billed as one of the main stars , though only appears in an extended flashback sequence). During the taking off between the noble landowner and the flunky is severed the hand of Silas . One time dead the noble , the vengeful spirit returns the castle , the revenge will be with the successors of tyrant Fengriffin . The severed hand goes back to torment the young couple , they are caught up by an ominous ghost and become inextricably involved in weird killings with several corpses . They will confront the mysterious evil force and legacy of horror of the Frengriffen family . Then the great Peter Cushing shows up to investigate at whatever risk .

This Amicus production (Max Rosenberg and Milton Subotsky) is a good terror film with malevolent spectres and family curses and with amazing final surprise . The movie is plenty of grisly murders , tension , terror , genuine screaming , horrible chills and a little bit of blood and gore . The picture packs a creepy atmosphere and strange color by the fine cinematographer Dennis Cop . The casting is frankly well , there appears various awesome British actors , the always excellent Peter Cushing , Patrick McGee , Guy Rolfe and the habitual villain Herbert Lom who does not appear at all until the last quarter of the film . The tale was rightly directed by Roy War Baker who realized magnificent terror films (Quatermass and the pit) . Motion picture will appeal to British horror enthusiasts .