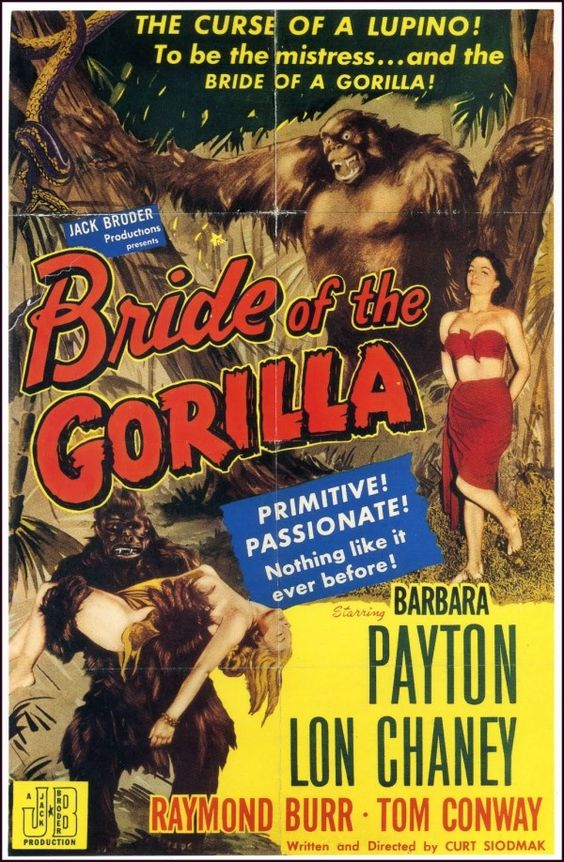 Beautiful Barbara Payton is married to a much older man who has little time for her. What is a blonde, buxom girl to do? Well, no secret here that she has an affair with the foreman of her husband’s plantation, Raymond Burr, who gives a performance worthwhile yet plays a guy with which you will have virtually no sympathy. Things get nasty in the jungle: Barb’s husband is killed and Ray marries her. Yet, a native old woman seeks revenge on Burr by poisoning him so that he will turn into some jungle demon…a big gorilla. On his track is none other than Commissioner Tarro – Lon Chaney Jr. playing a native-turned-educated policeman from the jungle land. Chaney isn’t really bad, just unbelievable in his role. Curt Siodmak directed this film and wrote the script. Siodmak was the writer of Universal’s classic The Wolfman. In both pictures we have an average man turn into a beast at night. In both pictures we have transformation scenes – grand ones in The Wolfman and pitifully cheap ones in this production. Chaney also is in both films. Siodmak really does a less-than-average job behind the camera. My guess is budgetary constraints really held his hand in check. This is a very cheaply made film. The jungle house looks fine, but jungle scenes look less than real. Siodmak does have a few nicely shot scenes, particularly as the lens becomes a character walking into the jungle. What about the gorilla? No Jack Pierce here. In fact the gorilla maybe makes three appearances and none of them very substantial. The film has a lot of talking, Raymond Burr brooding a lot, and Chaney lecturing us on the “laws of the jungle.” Payton does a decent job, but let’s face it. She is there for one reason only. And Evelyn Ankers she is not! Character actor Tom Conway rounds out the leads, giving another one of his wooden but amiable performances.