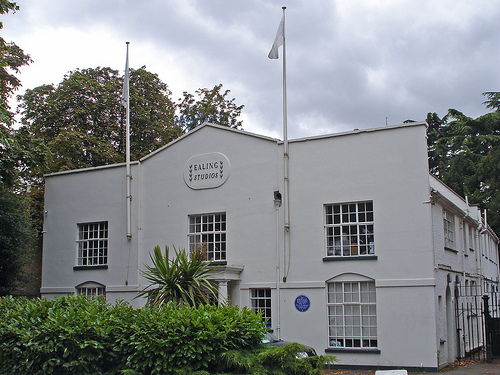 Ealing Studios is a television and film production company and facilities provider at Ealing Green in West London. Will Barker bought the White Lodge on Ealing Green in 1902 as a base for film making, and films have been made on the site ever since. It is the oldest continuously working studio facility for film production in the world,[1] and the current stages were opened for the use of sound in 1931. It is best known for a series of classic films produced in the post-WWII years, including Kind Hearts and Coronets (1949), Passport to Pimlico (1949), The Lavender Hill Mob (1951), and The Ladykillers (1955). The BBC owned and filmed at the Studios for forty years from 1955 until 1995. Since 2000, Ealing Studios has resumed releasing films under its own name, including the revived St Trinian’s franchise. In the past decade, films shot here include The Importance of Being Earnest (2002) and Shaun Of The Dead (2004). The Metropolitan Film School of London operates on the lot.

The site was first occupied by Will Barker Studios from 1902.[2] It was acquired by theatre producer Basil Dean’s newly-formed production company in 1929 and reopened as Ealing Studios in 1931. In 1933 the company was renamed Associated Talking Pictures. When Dean left in 1938 to be replaced by Michael Balcon from MGM, about 60 films had been made at the studios. Balcon discontinued the ATP name and began to issue films under the Ealing Studios name. In 1944 the company was taken over by the Rank Organisation.

In the 1930s and 1940s, Ealing produced many comedies with stars such as Gracie Fields, George Formby, Stanley Holloway and Will Hay, who had established their reputations in other spheres of entertainment. The company was also instrumental in the use of documentary film-makers to make more realistic war films. These included Went the Day Well? (1942), The Foreman Went to France (1942), Undercover (1943), and San Demetrio, London (1943). In 1945, the studio made its influential chiller compendium Dead of Night.

In the post-war period, the company embarked on a series of celebrated comedies which became the studio’s hallmark. These were often lightly satirical and were seen to reflect aspects of British character and society. The first was Hue and Cry in 1947 and the last Barnacle Bill in 1956. However, the best remembered Ealing films were produced between 1948 and 1955: Whisky Galore! (1949), Passport to Pimlico (1949), Kind Hearts and Coronets (1949), The Lavender Hill Mob (1951), The Man in the White Suit (1951), The Titfield Thunderbolt (1953) and The Ladykillers (1955) are now seen as classics of British cinema.

The BBC bought the studios in 1955, though productions bearing the Ealing name continued to be made at the MGM studio at Elstree Studios for two years. The BBC based its Film Department at the studios; and at its peak 56 film crews used the studios as a base for location filming of dramas, documentaries and other programmes; shot on 16mm and occasionally 35mm film.[3] There were also over 50 cutting rooms working on every genre except News and Current Affairs. Many great programmes came out of Ealing from Alistair Cooke’s America edited by Alan Tyler to Z-Cars edited by Shelia Tomlinson and Cathy Come Home edited by Roger Waugh. These programmes had massive post production support, viewing theatres, transfer suites, dubbing theatre, maintenance; all these staff and the film crews made up what was fondly known as the TFS Family. In the 1980s, the BBC developed and expanded the use of electronic PSC (Portable Single Camera) location equipment and the use of 16mm film on location gradually reduced. The BBC also used the studio facilities at Ealing for filmed inserts where the electronic studio could not be used, such as for the excavation site in Quatermass and the Pit (1958–59), The White Rabbit (TV mini-series, 1967), Colditz (1972–74) and the communal sequences in Porridge (1974–77). Programmes wholly shot on film were made there also, such as Alice in Wonderland (1966), The Singing Detective (1986) and Fortunes of War (1987).

The BBC had preview theatres to run 16mm sepmag film and 35mm. The 16mm machines were Bauer and the 35mm projectors Kalee 21.The projection area was a long room (open plan) with projectors serving theatres E -J. There was a separate projection room in the same area for theatre K, which was 35mm. There was also a dubbing theatre B, where 16mm productions would be dubbed. There was also film dispatch and sound transfer suites, where the quarter inch tape from Nagra tape machines would be transferred to 16mm magnetic. Film previews ran rushes, cutting copies, synch rushes, answer prints and transmission prints before going to telecine.

With the BBC seeking to reduce costs and in particular Studios a decision was taken to sell Ealing Studios on the open market. Although a sale was agreed with BBRK the BBC inserted a buy-back clause so that in the event that BBRK (for whatever reasons) put the site up for sale then the BBC would have first option to purchase. BBRK found it necessary to sell the site and the BBC repurchased the site and sold it on for £1.00 to the NFTS.

[
In 1995 the studios were purchased by the National Film and Television School (NFTS) and yet again in mid-2000 by a consortium led by Fragile Films’ Uri Fruchtmann and Barnaby Thompson, Harry Handelsman and John Kao, with a view to reviving the fortunes of the studio. Handelsman’s Manhattan Loft Corporation redeveloped the 3.8 acre site to include the existing Grade II listed sound stages. The studio has since begun to produce theatrical films again, such as Lucky Break (2001), The Importance of Being Earnest (2002), and Valiant (2005). Shaun Of The Dead and the highly rated 2005 horror film The Descent were both shot on the lot. In 2007, Ealing revived the St Trinian’s franchise and the first film took over £12 million at the UK Box Office, making it the 4th most successful British independent movie of all time. St. Trinian’s, The Legend of Fritton’s Gold was released in December 2009 and took over £7 million at the UK Box Office. Between these, Ealing released Easy Virtue (2008), directed by Stephan Elliott and Dorian Gray (2009), directed by Oliver Parker. Ealing Studios is also home to the Metropolitan Film School of London, which has a purposely built school on the lot and use of the studios. ITV drama Downton Abbey shoots the servants’ quarters on stages 3A and 3B.