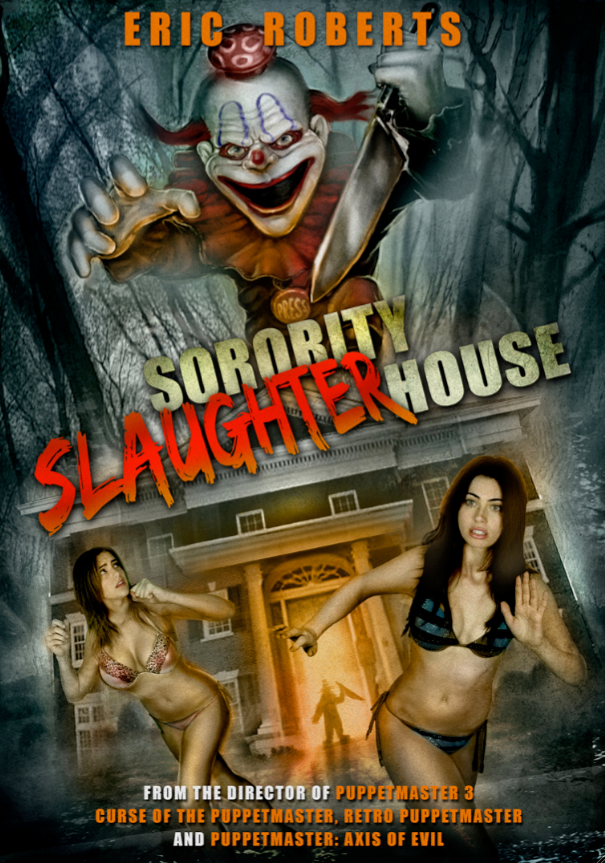 Movie begins with Eric Roberts as Dean of a college, who has been having an affair with one of the students. He is on the phone with her as she breaks up with him, having sent him a 12″ clown doll named “Bobo” as a “Breakup Gift.” He doesn’t take it too well, and starts ranting about “Making her and her sorority sisters pay, teasing men with their firm bodies… (etc).” He shoots himself, but his spirit ends up going into the clown doll. He decides to pay the sorority house a visit and kill everyone, and most of the movie is Bobo the clown doll stalking and killing the sorority sisters and the couple of boyfriends that are there.

The film is a cousin to the Puppet Master series, but with tongue firmly in cheek. As with films of this type, it either hits you in the right spot or not. But it definitely hit me in the right spot. I laughed consistently while watching the “effects” (basically, Bobo stands there still or a hand just off camera makes him bounce up and down) while Eric Roberts voices the clown (“Hi! I’m Bobo and you’re pissing me off!”). The actresses are all smoking hot and while, unfortunately, there is no nudity, the two hottest actresses spend just about their entire screen time in bikinis. Director David DeCoteau has been making low-budget flicks for over 30 years now, and so it’s competently directed, well lit, with clear sound. And Eric Roberts’ voice-overs of Bobo are a hoot.

Definitely a guilty pleasure for me. But I guess I’m just a sucker for tongue-in-cheek horror comedies with a twelve-inch clown puppet as the villain.