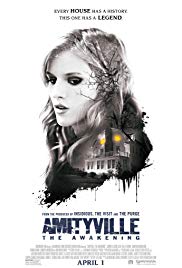 The original Amityville horror (1979) spawned a hardcore following and had the mystery of being based on true events. Being an instant hit it created a franchise sadly going downhill after part two. A remake (2005) did bring the story to the new kiddies in town and it had to happen, 2017 brought the story back again.

Bright thinking of the production to bring back the original story and some parts of the original flick is shown. So far so good but let me say that this was the best part.

There’s nothing scary at all in this flick. Of course they tried to add some jump scene’s but they are so predictable that it doesn’t work. On the other hand all the killings are done off-camera that it becomes so low on horror that it is really bad.

And so cliché, the sister being the outcast, a Goth chick, really? Nope, this wasn’t really worth watching for me. Just watch the 1979 version and forget the awakening.